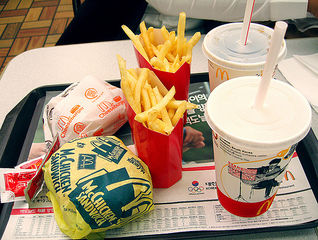 ScienceDaily (Nov. 9, 2010) — University of Toronto scientists have found that chemicals used to line junk food wrappers and microwave popcorn bags are migrating into food and being ingested by people where they are contributing to chemical contamination observed in blood.

Perfluorinated carboxylic acids or PFCAs are the breakdown products of chemicals used to make non-stick and water- and stain-repellent products ranging from kitchen pans to clothing to food packaging. PFCAs, the best known of which is perfluorooctanoic acid (PFOA), are found in humans all around the world.

“We suspected that a major source of human PFCA exposure may be the consumption and metabolism of polyfluoroalkyl phosphate esters or PAPs,” says Jessica D’eon, a graduate student in the University of Toronto’s Department of Chemistry. “PAPs are applied as greaseproofing agents to paper food contact packaging such as fast food wrappers and microwave popcorn bags.”

In the U of T study, rats were exposed to PAPs either orally or by injection and monitored for a three-week period to track the concentrations of the PAPs and PFCA metabolites, including PFOA, in their blood. Human exposure to PAPs had already been established by the scientists in a previous study. Researchers used the PAP concentrations previously observed in human blood together with the PAP and PFCA concentrations observed in the rats to calculate human PFOA exposure from PAP metabolism.

“We found the concentrations of PFOA from PAP metabolism to be significant and concluded that the metabolism of PAPs could be a major source of human exposure to PFOA, as well as other PFCAs,” says Scott Mabury, the lead researcher and a professor in the Department of Chemistry at the University of Toronto.

“This discovery is important because we would like to control human chemical exposure, but this is only possible if we understand the source of this exposure. In addition, some try to locate the blame for human exposure on environmental contamination that resulted from past chemical use rather than the chemicals that are currently in production.

“In this study we clearly demonstrate that the current use of PAPs in food contact applications does result in human exposure to PFCAs, including PFOA. We cannot tell whether PAPs are the sole source of human PFOA exposure or even the most important, but we can say unequivocally that PAPs are a source and the evidence from this study suggests this could be significant.”

Regulatory interest in human exposure to PAPs has been growing. Governments in Canada, the United States and Europe have signaled their intentions to begin extensive and longer-term monitoring programs for these chemicals. The results of this investigation provide valuable additional information to such regulatory bodies to inform policy regarding the use of PAPs in food contact applications.

The study was conducted by Jessica D’eon and Scott Mabury of the University of Toronto’s Department of Chemistry and is published November 8 in Environmental Health Perspectives. Research was funded by the Natural Sciences and Engineering Research Council of Canada.

Editor’s Note: This article is not intended to provide medical advice, diagnosis or treatment.