British scientists are celebrating after creating mini-versions of the “Big Bang” thought to have given birth to the universe 14 billion years ago. 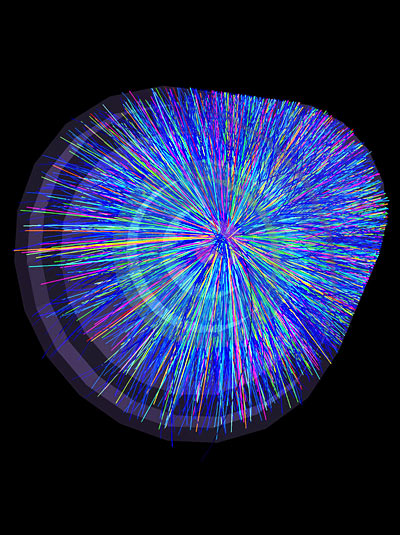 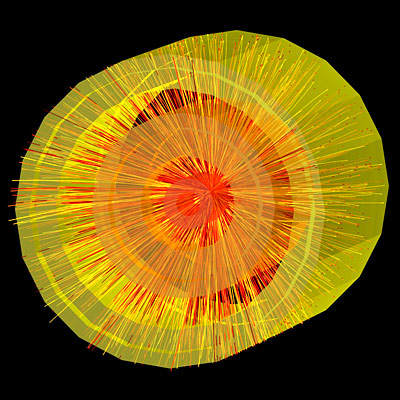 (Click on images to enlarge.) The collisions created the highest temperatures and densities ever achieved

The achievement was produced by the Large Hadron Collider (LHC) which is a giant machine probing the nature of matter at the European Organisation for Nuclear Research (CERN) in Geneva.

The “Mini Bangs” were created during the Alice experiment where lead ions were smashed together at enormous energies.

Dr David Evans, a member of the UK team from the University of Birmingham, said: “We are thrilled with the achievement.

“The collisions generated mini Big Bangs and the highest temperatures and densities ever achieved in an experiment.

“This process took place in a safe, controlled environment generating incredibly hot and dense sub-atomic fireballs with temperatures of over 10 trillion degrees, a million times hotter than the centre of the Sun.

One of the lead collisions in the Alice ‘detector’

“At these temperatures even protons and neutrons – which make up the nuclei of atoms – melt, resulting in a hot dense soup of quarks and gluons known as a quark-gluon plasma.”

Powerful magnets spun the lead ions round miles of underground tunnels at velocities approaching the speed of light.

Flying in opposite directions, the particles were focused into a narrow beam and forced to collide inside the massive Alice “detector”.

Scientists hope the quark-gluon plasma will allow them to learn more about the Strong Force, one of the four fundamental forces of nature.

The Alice experiment is just one part of the LHC, whose circular beam tunnel runs for 27km (16.7 miles) 100m (328ft) below the French/Swiss border.

Four detectors sit in huge chambers at various points in the tunnel.

The Alice experiment involves around 1,000 physicists and engineers from 100 institutes in 30 countries.

Britain’s contribution includes eight physicists and engineers and seven PhD students from the University of Birmingham.