The Pentagon has awarded an Afghanistan fuel supply contract worth a potential $630m (£388 million) to Mina Corp, a highly secretive company which refuses to disclose its ownership and whose role is under investigation by the US Congress. 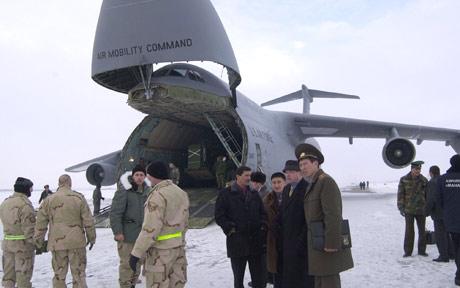 The award of the contract to supply the Manas Air Base in Kyrgyzstan, goes directly against the requests of the country’s President, Roza Otunbayeva, making it an enormous diplomatic gamble for the US.

Derek Mitchell, principal deputy assistant secretary of defence, said that the Pentagon’s main concern was ensuring supplies for the war in Afghanistan.

“It is a priority of the United States to ensure a secure, reliable and uninterrupted supply of fuel to the transit centre to enable us to sustain our critical operations in Afghanistan,” he said.

Mina Corp and Red Star, which share personnel and operations, have won more than $3bn worth of contracts to supply Manas and the Bagram airbase in Afghanistan since 2003, but have never revealed their ownership.

The award has been made even more controversial by the revelation in the Washington Post over the weekend that Erkin Bekbolotov, one of Mina Corp’s partners, met with Atai Sadybakasov, Mrs Otunbayeva’s son, in Istanbul in July. Two revolutions in the country in the past five years have been caused in part by public suspicions that the families of the then Presidents were benefiting from the contracts.

Mrs Otunbayeva has in recent months lobbied Washington to cancel the tender and instead give the contract to a joint venture between Russian state-controlled oil firm Gazpromneft and a state-owned Kyrgyz oil company.

John Tierney, chairman the House Committee on Oversight and Government Reform, which launched its investigation into the two companies in April, confirmed yesterday that his team had discovered no evidence of business links between Mina Corp and the former president’s family.

“The Subcommittee has not uncovered any credible evidence to support the allegations that the Bakiyev family or their affiliates, owned or received financial benefits from the fuel contractors or subcontractors,” he said.

His report, out later this month, will instead criticise the Pentagon for its lack of transparency. “The Pentagon and State Department ignored widespread Kyrgyz public perceptions of contract corruption engendered by a fundamental lack of transparency in the contracting process and Mina Corporation’s operations,” he said yesterday.

The new contract includes provisions for a second supplier, such as the Kyrgyz-Russian joint venture, to supply a portion of the fuel.

But it is unclear whether this will be enough to placate Kyrgyz politicians opposed to Mina Corp’s role, who are likely to play prominent roles when a new government is formed within the next few weeks.

Omurbek Babanov, the leader of the Respublika party, and Almazbek Atambayev, chairman of the Social Democratic Party chairman, have in the past pushed to oust Mina Corp. And Ata-Zhurt, the party which won the most seats in last month’s election, favours ejecting the US from the base.