This, Americans, is so much more important than you:

This is the change BS that you voted for and if you vote Republican, then you are also screwed and here is why:

You do not really have a choice:

Waking up some Americans seems to be a hopeless task:

– Is Obama A Keynesian?: ‘He was born in Hawaii!’ … ‘Most Americans Are Not Stupid.` 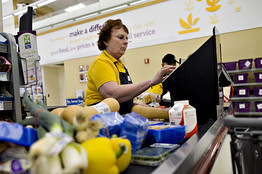 (Wall Street Journal) — A huge number of American households are still relying on government assistance to buy food as the recession continues to batter families.

Some 42,389,619 Americans received food stamps in August, a 17% rise from the same time a year ago, according to the U.S. Department of Agriculture, which tracks the data. That number is up 58.5% from August 2007, before the recession began.

Idaho posted the largest jump in recipients in the past year. The number of people receiving food stamps climbed 38.8% but their rolls are still fairly low. Just 211,883 Idaho residents collected food stamps in August.

Food stamps have become a lifeline for workers who have lost their jobs, particularly among the growing share of unemployed Americans who have also exhausted their unemployment benefits. Lines at grocers at midnight on the first of the month have signaled that, in many cases, those benefits aren’t tiding families over and they run out before their next check kicks in.

Even during the summer children returned to schools to take advantage of free lunch programs where they were available. Nearly 195 million lunches were dished out in August and 58.9% of them were free. Another 8.4% were available at reduced prices. That number will surge when the fall data are released because children will be back in school. Last September, for example, more than 590 million lunches were served, nearly 64% of which were free or reduced price.

Food Stamp Use, by State