As the US Federal Reserve meets today to decide whether its next blast of quantitative easing should be $1 trillion or a more cautious $500bn, it does so knowing that China and the emerging world view the policy as an attempt to drive down the dollar. 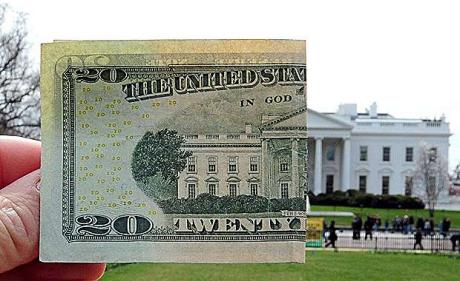 The Fed’s “QE2” risks accelerating the demise of the dollar-based currency system, perhaps leading to an unstable tripod with the euro and yuan, or a hybrid gold standard, or a multi-metal “bancor” along lines proposed by John Maynard Keynes in the 1940s.

China’s commerce ministry fired an irate broadside against Washington on Monday. “The continued and drastic US dollar depreciation recently has led countries including Japan, South Korea, and Thailand to intervene in the currency market, intensifying a ‘currency war’. In the mid-term, the US dollar will continue to weaken and gaming between major currencies will escalate,” it said.

David Bloom, currency chief at HSBC, said the root problem is lack of underlying demand in the global economy, leaving Western economies trapped near stalling speed. “There are no policy levers left. Countries are having to tighten fiscal policy, and interest rates are already near zero. The last resort is a weaker currency, so everybody is trying to do it,” he said.

Pious words from G20 summit of finance ministers last month calling for the world to “refrain” from pursuing trade advantage through devaluation seem most honoured in the breach.

Taiwan intervened on Monday to cap the rise of its currency, while Korea’s central bank chief said his country is eyeing capital controls as part of its “toolkit” to stem the flood of Fed-created money leaking out of the US and sloshing into Asia. Brazil has just imposed a 2pc tax on inflows into both bonds and equities – understandably, since the real has risen by 35pc against the dollar this year and the country has a current account deficit.

“It is becoming harder to mop up the liquidity flowing into these countries,” said Neil Mellor, of the Bank of New York Mellon. “We fully expect more central banks to impose capital controls over the next couple of months. That is the world we live in,” he said. Globalisation is unravelling before our eyes.

Each case is different. For the 40-odd countries pegged to the dollar or closely linked by a “dirty float”, the Fed’s lax policy is causing havoc. They are importing a monetary policy that is far too loose for the needs of fast-growing economies. What was intended to be an anchor of stability has become a danger.

Hong Kong’s dollar peg, dating back to the 1960s, makes it almost impossible to check a wild credit boom. House prices have risen 50pc since January 2009, despite draconian curbs on mortgages. Barclays Capital said Hong Kong may switch to a yuan peg within two years.

Mr Bloom said these countries are under mounting pressure to break free from the dollar. “They are all asking themselves whether these pegs are a relic of the past,” he said.

China faces a variant of the problem with its mixed currency basket, a sort of “crawling peg”. Commerce minister Chen Deming said last week that US dollar issuance is “out of control”. It is causing a surge of imported inflation in China.

Critics in the US Congress say China could solve that particular problem very quickly by letting the yuan rise enough to bring the country’s $180bn trade surplus into balance.

They say the strategy of holding down the yuan to underpin China’s export-led model is the real source of galloping wage and price inflation on China’s eastern seaboard. The central bank has accumulated $2.5 trillion of foreign bonds but lacks the sophisticated instruments to “sterilise” these purchases and stem inflationary “blow-back”.

But whatever the rights and wrongs of the argument, the reality is that a chorus of Chinese officials and advisers is demanding that China switch reserves into gold or forms of oil. As this anti-dollar revolt gathers momentum worldwide, the US risks losing its “exorbitant privilege” of currency hegemony – to use the term of Charles de Gaulle.

The innocent bystanders caught in the crossfire of Fed policy are poor countries such as India, where primary goods make up 60pc of the price index and food inflation is now running at 14pc. It is hard to gauge the impact of a falling dollar on commodities, but the pattern in mid-2008 was that it led to oil, metal, and grain price rises with multiple leverage. The core victims were the poorest food-importing countries in Africa and South Asia. Tell them that QE2 brings good news.

So the question that Ben Bernanke and his colleagues should ask themselves is whether they have thought through the global ramifications of their actions, and how the strategic consequences might rebound against America itself.