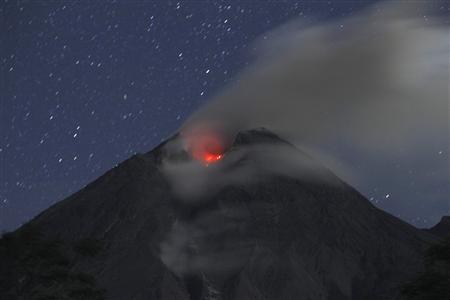 JAKARTA (Reuters) – Indonesia’s Mount Merapi volcano erupted on Monday for the third time in a week, driving the number of refugees to almost 70,000, as the death toll from a tsunami thousands of kilometers to the west rose to 431, officials said.

The fresh eruption forced a thick ash cloud around 1.5 kilometers (0.9 miles) into the air above Merapi, which sits on the outskirts of Yogyakarta city in Central Java, and caused panicked residents to flee villages on the slopes of the mountain for safety shelters.

The National Disaster Mitigation Agency said that 38 people have been killed and 69,533 evacuated since Merapi began erupting last week, while Indonesia’s vulcanology agency warned that flights around Yogyakarta may be disrupted.

Scientists are also monitoring increased activity at two other volcanoes, Mount Anak Krakatau in the Sunda strait and Mount Sinabung in North Sumatra, an official from the vulcanology agency said.

Merapi’s third eruption comes as Indonesian disaster officials are struggling to deliver aid to the remote Mentawai islands in Sumatra province, where a 7.5 magnitude quake triggered a tsunami last week.

The tsunami killed 431 people and another 88 are still missing, the National Disaster Mitigation Agency said.