he European Union’s plans to levy direct taxes on Britons and those in other member countries would amount to a “transfer of sovereignty” that would force the Coalition Government to hold a Europe referendum. 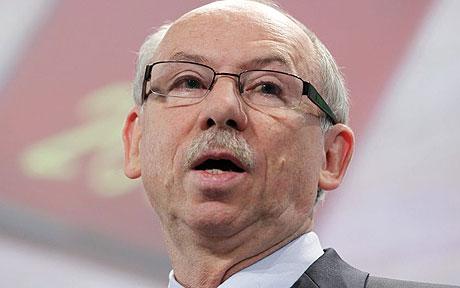 Janusz Lewandowski, the European budget commissioner, admitted that his plan would have to be ‘ratified’ in every country Photo: REUTERS

Janusz Lewandowski, the European budget commissioner, has told The Daily Telegraph that his recent proposals to finance the EU through VAT, carbon, aviation or financial transaction taxes would touch on “holy” elements of national sovereignty.

So sensitive is the plan, tabled last week, to move from payments made by national treasuries to giving the EU “own resources” through direct European taxation, that it would have to be “ratified” in every country, the commissioner admitted.

“It needs ratification because it is prerogative of a national state to set its own taxes. No taxation without representation – it must be ratified,” said the commissioner. “This is a sacred prerogative of national parliaments.”

Under the Coalition Government’s promised “referendum lock” any transfer of powers, such as tax raising powers, from Westminster to Brussels would be subject to a popular vote by Britons at a time when public hostility to the EU is growing.

Bill Cash, the Conservative chairman of the powerful House of Commons scrutiny committee, insisted that the question of EU taxation would be examined by MPs in terms of the referendum pledge.

“EU taxation proposals are invasive of British democracy’s constitutional position. We will be closely examining these matters in the light of the referendum requirement,” he said.

The tax plan is additional headache for David Cameron ahead of a summit battle over the Brussels budget for next year, and French and German pressure to change the EU’s Treaty later this week.

Tory backbenchers have demanded that the Prime Minister “repatriate” powers from Brussels in return for going along with German and French requests to change the EU’s Lisbon Treaty in order to prevent future euro zone debt crises.

The British leader will also be rallying opposition to Mr Lewandowski’s proposed six per cent increase in the EU budget for next year, an “unacceptable, unjustifiable and unnecessary” increase that will cost Britain an extra £884 million at a time when Mr Cameron is cutting national budgets.

The budget commissioner is ready to defend the EU spending increases against accusations that they are an additional burden on stretched national budgets.

“Britain’s huge, impressive austerity programme is not to be blamed on Brussels,” said Mr Lewandowski. “The (EU) budget is too small.”

Mr Lewandowski has proposed that from 2013 the EU should finance itself via a cut of direct taxes on consumers in a bid to reduce reliance on contributions from national treasuries, payments that are increasingly resented in countries like Britain following painful austerity programmes.

He is concerned that Mr Cameron and other European leaders will push to freeze or cut Brussels spending by limiting their national contributions when negotiations on EU financing from 2014-2020 begin next year.

Under his proposals national payments would be cut and funding for most of the EU spending, worth £114 billion every year, would be replaced by taking a fixed percentage for Brussels of aviation or carbon taxes, new levies on financial transaction and VAT.

The plan is doubly controversial in Britain because “own resources” giving the EU an independent income would also lead to the abolition of a British rebate worth £3 billion a year, a cashback system that Mr Lewandowski has suggested is “unjustified”.

A British diplomat said: “What matters here is that the treaty is crystal clear that each Member State has a veto over any changes to this system and we have been crystal clear that we would oppose any system that included direct taxes financing the EU budget.”