Now China will be No.1 in HIGH-FREQUENCY TRADING! 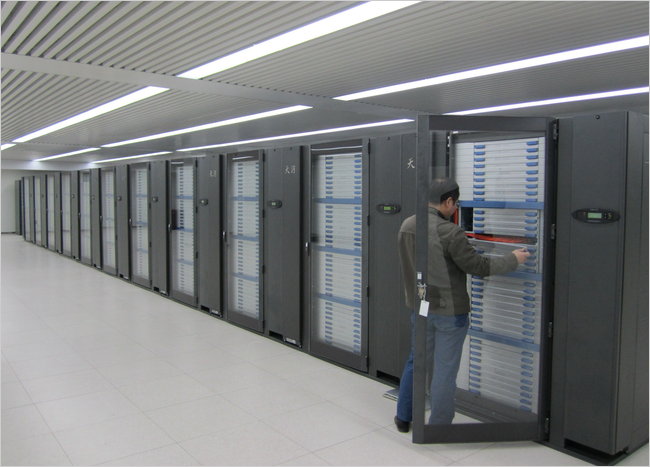 A Chinese scientific research center has built the fastest supercomputer ever made, replacing the United States as maker of the swiftest machine, and giving China bragging rights as a technology superpower.

The computer, known as Tianhe-1A, has 1.4 times the horsepower of the current top computer, which is at a national laboratory in Tennessee, as measured by the standard test used to gauge how well the systems handle mathematical calculations, said Jack Dongarra, a University of Tennessee computer scientist who maintains the official supercomputer rankings.

Although the official list of the top 500 fastest machines, which comes out every six months, is not due to be completed by Mr. Dongarra until next week, he said the Chinese computer “blows away the existing No. 1 machine.” He added, “We don’t close the books until Nov. 1, but I would say it is unlikely we will see a system that is faster.”

Officials from the Chinese research center, the National University of Defense Technology, are expected to reveal the computer’s performance on Thursday at a conference in Beijing. The center says it is “under the dual supervision of the Ministry of National Defense and the Ministry of Education.”

The race to build the fastest supercomputer has become a source of national pride as these machines are valued for their ability to solve problems critical to national interests in areas like defense, energy, finance and science. Supercomputing technology also finds its way into mainstream business; oil and gas companies use it to find reservoirs and Wall Street traders use it for superquick automated trades. Procter & Gamble even uses supercomputers to make sure that Pringles go into cans without breaking.

And typically, research centers with large supercomputers are magnets for top scientific talent, adding significance to the presence of the machines well beyond just cranking through calculations.

Over the last decade, the Chinese have steadily inched up in the rankings of supercomputers. Tianhe-1A stands as the culmination of billions of dollars in investment and scientific development, as China has gone from a computing afterthought to a world technology superpower.

“What is scary about this is that the U.S. dominance in high-performance computing is at risk,” said Wu-chun Feng , a supercomputing expert and professor at Virginia Polytechnic Institute and State University. “One could argue that this hits the foundation of our economic future.”

Modern supercomputers are built by combining thousands of small computer servers and using software to turn them into a single entity. In that sense, any organization with enough money and expertise can buy what amount to off-the-shelf components and create a fast machine.

The Chinese system follows that model by linking thousands upon thousands of chips made by the American companies Intel and Nvidia. But the secret sauce behind the system — and the technological achievement — is the interconnect, or networking technology, developed by Chinese researchers that shuttles data back and forth across the smaller computers at breakneck rates, Mr. Dongarra said.

“That technology was built by them,” Mr. Dongarra said. “They are taking supercomputing very seriously and making a deep commitment.”

For decades, the United States has developed most of the underlying technology that goes into the massive supercomputers and has built the largest, fastest machines at research laboratories and universities. Some of the top systems simulate the effects of nuclear weapons, while others predict the weather and aid in energy research.

At the computing conference on Thursday in China, the researchers will discuss how they are using the new system for scientific research in fields like astrophysics and bio-molecular modeling. Tianhe-1A, which is housed in a building at the National Supercomputing Center in Tianjin, can perform mathematical operations about 29 million times faster than one of the earliest supercomputers, built in 1976.

For the record, it performs 2.5 times 10 to the 15th power mathematical operations per second.

Mr. Dongarra said a long-running Chinese project to build chips to rival those from Intel and others remained under way and looked promising. “It’s not quite there yet, but it will be in a year or two,” he said.

He also said that in November, when the list comes out, he expected a second Chinese computer to be in the top five, culminating years of investment.

“The Japanese came out of nowhere and really caught people off guard,” Mr. Feng said. “With China, you could see this one coming.”

Steven J. Wallach, a well-known computer designer, played down the importance of taking the top spot on the supercomputer rankings.

“It’s interesting, but it’s like getting to the four-minute mile,” Mr. Wallach said. “The world didn’t stop. This is just a snapshot in time.”

The research labs often spend weeks tuning their systems to perform well on the standard horsepower test. But just because a system can hammer through trillions of calculations per second does not mean it will do well on the specialized jobs that researchers want to use it for, Mr. Wallach added.

The United States has plans in place to make much faster machines out of proprietary components and to advance the software used by these systems so that they are easy for researchers to use. But those computers remain years away, and for now, China is king.