‘Divide and rule!’ works just fine for the elitists.

From Israel to Iraq, a Christian flight of Biblical proportions has begun. 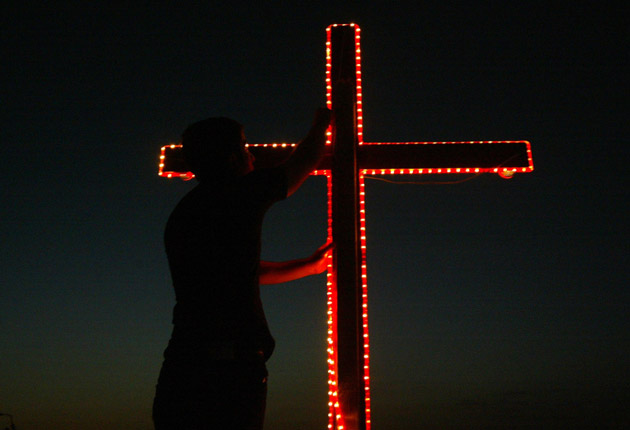 A cross is decorated with lights as an Orthodox Christians in the northern Iraqi city of Arbil commemorate the Elevation of the Holy Cross on September 13, 2010

In the centre of the rebuilt Beirut, the massive old Maronite Cathedral of St George stands beside the even larger mass of the new Mohammad al-Amin mosque.

The mosque’s minarets tower over the cathedral, but the Maronites were built a spanking new archbishop’s house between the two buildings as compensation. Yet every day, the two calls to prayer – the clanging of church bells and the wailing of the muezzin – beat an infernal percussion across the city. Both bells and wails are tape recordings, but they have been turned up to the highest decibel pitch to outdo each other, louder than an aircraft’s roar, almost as crazed as the nightclub music from Gemmayzeh across the square. But the Christians are leaving.

Across the Middle East, it is the same story of despairing – sometimes frightened – Christian minorities, and of an exodus that reaches almost Biblical proportions. Almost half of Iraq’s Christians have fled their country since the first Gulf War in 1991, most of them after the 2004 invasion – a weird tribute to the self-proclaimed Christian faith of the two Bush presidents who went to war with Iraq – and stand now at 550,000, scarcely 3 per cent of the population. More than half of Lebanon’s Christians now live outside their country. Once a majority, the nation’s one and a half million Christians, most of them Maronite Catholics, comprise perhaps 35 per cent of the Lebanese. Egypt’s Coptic Christians – there are at most around eight million – now represent less than 10 per cent of the population.

This is, however, not so much a flight of fear, more a chronicle of a death foretold. Christians are being outbred by the majority Muslim populations in their countries and they are almost hopelessly divided. In Jerusalem, there are 13 different Christian churches and three patriarchs. A Muslim holds the keys to the Church of the Holy Sepulchre to prevent Armenian and Orthodox priests fighting each other at Easter.

When more than 200 members of 14 different churches – some of them divided – gathered in Rome last week for a papal synod on the loss of Christian populations in the lands where Christianity began, it was greeted with boredom or ignored altogether by most of the West’s press.

Yet nowhere is the Christian fate sadder than in the territories around Jerusalem. As Monsignor Fouad Twal, the ninth Latin patriarch of Jerusalem and the second to be an Arab, put it bleakly, “the Israelis regard us as 100 per cent Palestinian Arabs and we are oppressed in the same way as the Muslims. But Muslim fundamentalists identify us with the Christian West – which is not always true – and want us to pay the price.” With Christian Palestinians in Bethlehem cut off from Jerusalem by the same Israeli wall which imprisons their Muslim brothers, there is now, Twal says, “a young generation of Christians who do not know or visit the Holy Sepulchre”.

The Jordanian royal family have always protected their Christian population – at 350,000, it is around 6 per cent of the population – but this is perhaps the only flame of hope in the region. The divisions within Christianity proved even more dangerous to their community than the great Sunni-Shia divide did to the Muslims of the Middle East. Even the Crusaders were divided in their 100-year occupation of Palestine, or “Outremer”, as they called it. The Lebanese journalist Fady Noun, a Christian, wrote a profound article from Rome last week in which he spoke of the Christian loss as “a great wound haemorrhaging blood”, and bemoaned both Christian division and “egoism” for what he saw as a spiritual as well as a physical emigration. “There are those Christians who reach a kind of indifference… in Western countries who, swayed by the culture of these countries and the media, persuade eastern Christians to forget their identity,” he wrote.

Pope Benedict, whose mournful visit to the Holy Land last year prompted him to call the special synod which ended in the Vatican at the weekend, has adopted his usual perspective – that, despite their difficulties, Christians of the “Holy Land” must reinvigorate their feelings as “living stones” of the Middle Eastern Church. “To live in dignity in your own nation is before everything a fundamental human right,” he said. “That is why you must support conditions of peace and justice, which are indispensable for the harmonious development of all the inhabitants of the region.” But the Pope’s words sometimes suggested that real peace and justice lay in salvation rather than historical renewal.

Patriarch Twal believes that the Pope understood during his trip to Israel and the West Bank last year “the disastrous consequences of the conflict between Jews and Palestinian Arabs” and has stated openly that one of the principal causes of Christian emigration is “the Israeli occupation, the Christians’ lack of freedom of movement, and the economic circumstances in which they live”. But he does not see the total disappearance of the Christian faith in the Middle East. “We must have the courage to accept that we are Arabs and Christians and be faithful to this identity. Our wonderful mission is to be a bridge between East and West.”

One anonymous prelate at the Rome synod, quoted in one of the synod’s working papers, took a more pragmatic view. “Let’s stop saying there is no problem with Muslims; this isn’t true,” he said. “The problem doesn’t only come from fundamentalists, but from constitutions. In all the countries of the region except Lebanon, Christians are second-class citizens.” If religious freedom is guaranteed in these countries, “it is limited by specific laws and practices”. In Egypt, this has certainly been the case since President Sadat referred to himself as “the Muslim president of a Muslim country”.

The Lebanese Maronite Church – its priests, by the way, can marry – understands all too well how Christians can become aligned with political groups. The Lebanese writer Sami Khalife wrote last week in the French-language newspaper L’Orient-Le Jour – the francophone voice of Lebanon’s Christians – that a loss of moral authority had turned churches in his country into “political actors” which were beginning to sound like political parties. An open letter to the Iranian president, Mahmoud Ahmedinejad, warning him to try to turn Lebanon into a “front line” against Israel, was signed by 250 Lebanese. Most of them were from the minority Christian community.

Nor can the church ignore Saudi Arabia, where Christianity is banned as a religion just as much as the building of churches. Christians cannot visit the Islamic holy cities of Mecca or Medina – the doors of the Vatican and Canterbury Cathedral are at least open to Muslims – and 12 Filipinos and a priest were arrested in Saudi Arabia only this month for “proselytism” for holding a secret mass. There is, perhaps, a certain irony in the fact that the only balance to Christian emigration has been the arrival in the Middle East of perhaps a quarter of a million Christian Filipino guest workers – especially in the Gulf region – while Patriarch Twal reckons that around 40,000 of them now work and live in Israel and “Palestine”.

Needless to say, it is violence against Christians that occupies the West, a phenomenon nowhere better, or more bloodily, illustrated than by al-Qa’ida’s kidnapping of Archbishop Faraj Rahho in Mosul – an incident recorded in the US military archives revealed on Saturday – and his subsequent murder. When the Iraqi authorities later passed death sentences on two men for the killing, the church asked for them to be reprieved. In Egypt, there has been a gloomy increase in Christian-Muslim violence, especially in ancient villages in the far south of the country; in Cairo, Christian churches are now cordoned off by day-and-night police checkpoints.

And while Western Christians routinely deplore the falling Christian populations of the Middle East, their visits to the region tend to concentrate on pilgrimages to Biblical sites rather than meetings with their Christian opposite numbers.

Americans, so obsessed by the myths of East-West “clashes of civilisation” since 11 September 2001, often seem to regard Christianity as a “Western” rather than an Eastern religion, neatly separating the Middle East roots of their own religion from the lands of Islam. That in itself is a loss of faith.

1 thought on “Robert Fisk: Exodus. The changing map of the Middle East”