The US is building an £8 billion super military base on the Pacific island of Guam in an attempt to contain China’s military build-up. 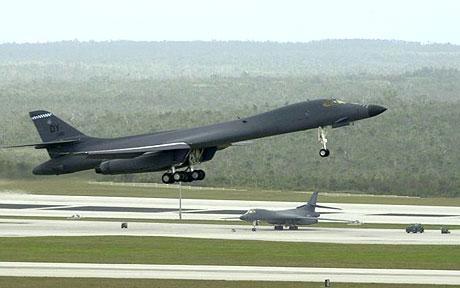 A B-1B Lancer takes off from Andersen Air Force Base in Guam in 2003 Photo: GETTY

The expansion will include a dock for a nuclear-powered aircraft carrier, a missile defence system, live-fire training sites and the expansion of the island’s airbase. It will be the largest investment in a military base in the western Pacific since the Second World War, and the biggest spend on naval infrastructure in decades.

However, Guam residents fear the build-up could hurt their ecosystem and tourism-dependent economy.

Estimates suggest that the island’s population will rise by almost 50 per cent from its current 173,000 at the peak of construction. It will eventually house 19,000 Marines who will be relocated from the Japanese island of Okinawa, where the US force has become unpopular.

The US’s Environmental Protection Agency (EPA) has said that this could trigger serious water shortages. The EPA said that dredging the harbour to allow an aircraft carrier to berth would damage 71 acres of pristine coral reefs.

Local residents’ concerns, however, have been sidelined by the US-China strategic competition. China has significantly expanded its fleet during the past decade, seeking to deter the US from intervening militarily in any future conflict over Taiwan, which Beijing claims as its own, and to project power across disputed territories in the gas and oil-rich South China Sea.

Beijing’s naval build-up is also intended secure the sea lanes from the Middle East, from where China will import an estimated 70-80 per cent of its oil needs by 2035 supplies it fears US could choke in the event of a conflict.

China has therefore invested in what are called its “string of pearls” a network of bases strung along the Indian Ocean rim, like Hambantota in Sri Lanka and Gwadar in Pakistan and in developing a navy which can operate far from home.

Experts agree China does not currently have the capability to challenge US supremacy in the Pacific and Indian Ocean. “China has a large appetite”, says Carl Ungerer, an analyst at Australian Strategic Policy Institute, “but it hasn’t got enough teeth”.

But China clearly intends to add bite to its naval arsenal. The country has acquired several modern Russian-made submarines and destroyers. Its shipyards are building new nuclear-powered submarines, as well as an aircraft carrier. There have also been reports that China is planning to test a new type of ballistic missile, the Dong Feng 21D, which would effectively render US carriers defenceless.

“China’s charm offensive is over”, says Ian Storey, an expert at the Institute of Southeast Asian Studies in Singapore, “and its given way to what you might call an adolescent foreign policy. The country’s flexing its muscles, letting us know it won’t be pushed around”.

The US is also investing another £126 million on upgrading infrastructure at the British-owned Indian Ocean atoll of Diego Garcia, 700 miles south of Sri Lanka.

Key among the upgrades at Diego Garcia, which are due for completion in 2013, will be the capability to repair a nuclear-powered guided-missile submarine which can carry up to 154 cruise missiles striking power equivalent to that of an entire US aircraft carrier battle group.

Diego Garcia, which has served as a launch-pad for air strikes on Iraq and Afghanistan, is already home to one third of what the US navy calls its Afloat Prepositioned Force equipment kept on standby to support military deployment anywhere in the world.