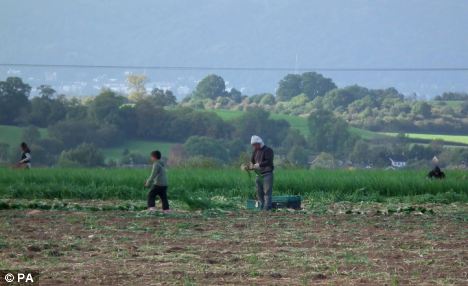 Shocking: Romanian children were pictured apparently working in a field in Worcestershire, helping to pick spring onions before they were picked up by officials

Romanian children, some as young as nine, have been found working as ‘slaves’ in near freezing conditions in the first discovery of its kind.

Some of the children were with their parents but others appeared to have been brought to the field in the back of a box fan on their own, the Gangmaster’s Licensing Authority (GLA) said.

The watchdog raided the field in the Kempsey area of Worcester with police last week after a GLA enforcement officer spotted the children working 24 hours earlier as she carried out investigations at another farm nearby.

The officer, Linda Boyle, said the children, five girls and two boys aged between nine and 15, were being made to work from 7.30am until dusk.

Wellington boots that looked suitable for a five-year-old were also found in the field, suggesting even younger children had worked there.

Mrs Boyle said it was the first time children had been discovered working in fields, although rumours that the practice went on were widespread.

She said: ‘I think it’s absolutely appalling that the people behind putting those workers in the field have allowed these children to be taken and used as slaves picking food for our tables.
‘I wasn’t shocked we found children because I had heard rumours. Last year, I found a baby’s glove in a field. I was shocked we found so many.

‘You have to be appalled. It makes you think twice about actually going and buying the spring onions.’

West Mercia Police have now taken six of the children into protective custody and are trying to identify their parents.

A GLA spokesman said two adults escaped from the field as the raid unfolded. The workers said they were not sure how much they would be paid, but intelligence suggests that a household of up to 40 people would get no more than £100 a week for the job.

The GLA, West Mercia Police and the UK Border Agency are still investigating and plan to arrest at least one unlicensed gangmaster this week.
As well as the Romanians working in the field, there was also a second, smaller group of Indian workers who were working for a licensed gangmaster.

Paul Whitehouse, chairman of the GLA, said: ‘In 2007 we celebrated the 200th anniversary of the end of the slave trade, but in 2010 we’ve got people working in appalling conditions who, while not actually being slaves, are very close to it.’

Earlier this month, a child trafficking ring forcing Romanian children as young as three to beg and steal for Fagin-style criminals was broken up by police.

In a series of raids, officers rescued 28 Roma children – including a pregnant 12-year-old girl – at 16 addresses and arrested three adults on suspicion of assault and neglect of a child.

The children, aged three to 17, were among 103 children found at 16 addresses in East London.

It is thought each child forced to work in London can earn £100,000 a year from begging and theft.

The Government currently deciding whether to sign up to the EU directive on human trafficking, which would make it easier to prosecute traffickers and protect victims.

The GLA is funded by the Department for Environment, Food and Rural Affairs.