One in 20 British adults has diabetes, according to new figures from GP practices 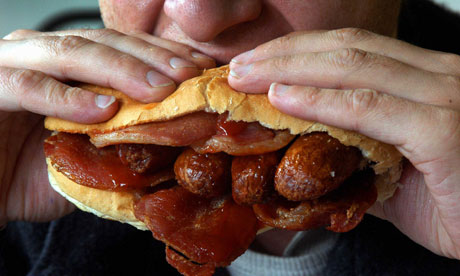 The number of people with diabetes has soared by 150,000 in the past year and one in 20 adults in the UK now has the condition, according to the latest figures from GP practices.

The data released by the charity Diabetes UK also shows that almost one in 10 adults, or 5.5 million people, are obese. The charity described these figures as “shocking” and it is calling on the government to put into practice its rhetoric on tackling health problems through prevention.

There is a strong link with type 2 diabetes and being overweight, sedentary and eating unhealthily. About 90% of diabetics – 2.5 million people in the UK – suffer from the type 2 condition. The figures, collected from GP practices between April 2009 and March this year, showed that about 2.8 million people aged 17 and over have diabetes — an increase of more than 150,000 since last year.

Another 1.1 million people are likely to suffer from diabetes without being aware of it. Diabetes UK has a risk score test on its website that can help to show an individual’s likelihood of developing type 2.

The figure for people over 16 registered as obese has risen to more than 5.5 million – an increase of more than 265,000 compared with the previous year.

Simon O’Neill, Diabetes UK’s director of care, information and advocacy, said: “Once again we see a shocking rise in diabetes and obesity rates in the UK. Many, but not all, people develop type 2 diabetes because they are overweight or obese so we must keep up the mantra of five fruit and veg a day, encourage daily physical activity and warn of the potentially devastating consequences of an unhealthy lifestyle.

“The obesity-fuelled type 2 diabetes epidemic is a clear example of where the new coalition government’s rhetoric of tackling health problems through prevention must be turned into action.”

He added: “Failure to act now means a bleak future of spiralling NHS costs and worsening public health,” referring to the £9bn a year that the NHS spends on diabetes – 10% of its current budget. If diabetes is not diagnosed early, or if it is poorly managed, he said, it can result in blindness, limb amputation, heart disease, stroke and kidney failure.

The Child Growth Foundation, a children’s health charity, warned that levels of diabetes and obesity were likely to rise still further. Tam Fry, who is the charity’s honorary chairman as well spokesman for the National Obesity Forum, said: “These figures confirm how appalling the levels of diabetes and obesity are in this country, and they would be even worse if they included children. Unfortunately we can expect levels to go up even if in some parts of the country obesity may be being brought under control. The fat are just getting fatter and suffering the consequences of excess weight.”

The risk factors are being overweight or having a large waist; being aged over 40 (or over 25 for black and south Asian people); and having a close relative with diabetes. Its symptoms include urinating frequently, especially at night, increased thirst, extreme tiredness, unexplained weight loss, slow healing of cuts and wounds and blurred vision. In type 2 diabetes the symptoms may not be immediately apparent and it can go undiagnosed for up to a decade, exacerbating health problems if it is untreated.

The picture in the US is much worse. The Centers for Disease Control and Prevention said on Friday that the prevalence of diabetes could increase to between one and five and one in three adults in 40 years.