Looks like the majority of the people of France – if we can trust the IFOP poll – have not understood that the raising of the retirement age has only happened because of the bankster bailouts and irresponsible government spending. There are more presents like this from the French government (and all other European governments) to come.

This is only the beginning.

Polls show that most people feel strikes against pension reform are justified, but the Senate vote in favour of the measures should be respected and the oil refinery blockades should end 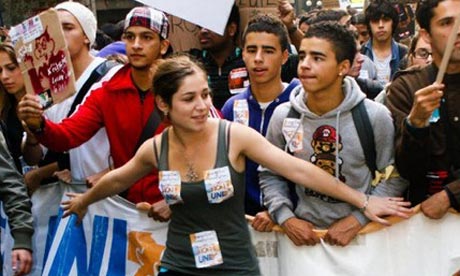 A flurry of polls revealed yesterday that France is bitterly divided over continuing industrial action as the country braced itself for a further round of strikes, protests and blockades.

On Friday, the upper house of the French parliament voted in favour of a pension reform raising the retirement age to 62. Union leaders have called for two more general strikes and French schoolchildren have threatened continued protests through the holidays. As the authorities struggled to restore petrol supplies across the country following the blockading of France’s 12 oil refineries, opinion polls gave a confused and contradictory picture of the level of support for more industrial action.

In an IFOP survey, 63% declared the two new days of strikes to be “justified”, while a similar poll by Opinion Way found that, although around half of all French people sympathised with the strikes, 56% believed the parliamentary vote should be respected and the unions should stop industrial action.

The IFOP poll also found that 53% believed the raising of the pension age from 60 to 62 was acceptable, and Opinion Way declared that 59% disapproved of the action against petrol refineries and 63% believed the government was right to smash the blockades.

Friday evening’s vote by the Senate was a vital step in the government’s reforms and came after three weeks of deliberations and the use of a controversial emergency constitutional measure to speed the bill through the upper house.

The move brought anger from the Socialist party opposition. “You have not finished with pensions. You have ignored the French people. You have not listened to our proposals. Your reform is unfair,” Jean-Pierre Bel, head of the Socialist Senate group, said. Another opposition senator, Pierre Mauroy, 82, said he was “dismayed” by the vote but added: “I don’t consider myself beaten because this business is not finished.”

Dominique Moisi, of the French Institute for International Relations, said it was impossible to predict what happens next. “I’m fascinated to know myself,” he said. “I believe [President Nicolas] Sarkozy will win the pension battle but he risks losing the presidential war. People want things to return to normal. Everyone is aware our system of social protection will have to change, but what will remain in the public opinion is the image of an authoritarian, arrogant president who is reluctant to [engage in] dialogue and is very nervy.”

Sarkozy, who has made pension reform the central measure of his first term in office, is determined that the final vote will take place on Tuesday after which the changes become law.

On the other side, union leaders have called for a massive mobilisation for two more days of strikes and protests, the first on Thursday, then on 6 November. Students have vowed to step up demonstrations that have already seen clashes with riot police, looting and arrests.

Anger has been fuelled because in the runup to the presidential elections in France in the spring of 2007 and after his election, Sarkozy insisted: “The right to retire at 60 years must remain.”

The views of Robert Piot, a 58-year-old unemployed man, are typical of those determined to continue the protests. “To me it’s a simple question of balance and mathematics: there is a pot of jobs in France and either you make older people work longer or you let young people have those jobs.”

‘WHY WE ARE OUT ON THE STREETS’

Juliane Charton, 17
Schoolgirl at the Balzac Lycée in Tours. Hoping to read history and politics at Sciences Po in Paris

These reforms have consequences on employment and therefore on us. When we finish our studies we will have even more difficulty finding work because older people are staying longer in their jobs. That there has been no consultation whatsoever with young people about these reforms is shameful. The government says there is not enough money for pensions, but it is a political choice where to look for it. If they did away with the many exemptions given to employers and bosses and imposed higher taxes on those who make billions every year it would raise in the region of €72bn, when the pension system needs €30bn. Sarkozy promised not to touch the retirement age, and it’s disgraceful that they sent riot police into schools to break the blockades.

I cannot retire until I am 62 even now, because I have not completed the necessary number of years’ contributions. For me the reforms will mean I have to work until 64. The retirement age of 60 is something we are historically and socially attached to. For us it is symbolic of the social reforms introduced after the second world war that established the idea that everyone who is working contributes to the national pension pot according to how much they earn, and this guarantees the pensions of those who retire. I work on building sites and already workers who reach 50-55 are being laid off because they are ill or have long-term health problems. If this law is passed it will mean that life for the ordinary labourer, who is already tired and worn out by years of hard manual work, will just be more misery. They argue we have to work longer because we are living longer, but I say we are living longer because of the hard-won social conditions and benefits that were fought for. If we no longer have them, who is to say that life expectancy will not fall, as it has in Russia?

As a postman, I don’t see myself aged 67 climbing six storeys with a bag of post weighing some 30kg, which is what I do at the moment. For heaven’s sake, it’s 2010, we should be talking about better working conditions, not worse. And as a society we should be able to provide a good life and a decent retirement. I start work at 6.30am and this means getting up around 5am. I want to retire, having worked all my life, with a decent pension.

The government is trying to tell us that we have to have this reform because everyone is living longer. In fact there’s a seven-year difference in the life expectancy of a manual worker and an executive, but they don’t tell you that. And you have to wonder whether life expectancy is linked to the social reforms we have won in the last 60 years and whether, when those benefits have been lost, the number of years we will live will drop. Karl Marx once said “workers of the world unite” and we have the support of many workers in Greece, Portugal, Spain. The current system means that those in work pay, according to their means and salaries, for the pensions of those who are retired. It’s based on redistribution of money. This is about more than just pension reform, it’s about changing the whole of society. I realise we have very little hope of changing society to our ideal, but I will continue fighting for the improved conditions and pay of workers.