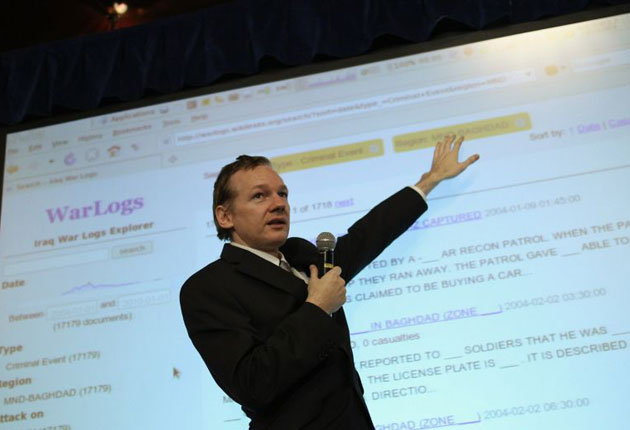 The man behind the posting of 400,000 leaked classified US military reports on the internet said that he wanted to reveal the truth behind the Iraq war.

WikiLeaks founder Julian Assange told a news conference in London that they were seeking to create the “maximum political impact possible” through their latest release.

“This disclosure is about the truth,” he said.

“We hope to correct some of that attack on the truth that occurred before the war, during the war, and which has continued on since the war officially concluded.”

He added: “While I am not sure we have achieved the maximum possible (political impact) I think we are getting pretty close.”

Mr Assange said that the reports documented 109,000 deaths – including 66,000 civilians, of which 15,000 were previously undocumented.

“That tremendous scale should not make us blind to the small human scale in this material. It is the deaths of one and two people per event that killed the overwhelming number of people in Iraq,” he said.

Solicitor Phil Shiner of Public Interest Lawyers said some of the deaths documented in the reports could have involved British forces and would now be the subject of legal action through the UK courts.

“Some of these deaths will be in circumstances where the UK have a very clear legal responsibility,” he said.

“This may be because the Iraqis died while under the effective control of UK forces – under arrest, in vehicles, helicopters or detention facilities.”

The leak of nearly 400,000 US military documents on Iraq by WikiLeaks contain accounts of abuse and misconduct by Iraqi authorities and US forces.

There are also some allegations of abuse by UK soldiers, the Guardian newspaper reported.

The archive comes after 90,000 files chronicling civilian deaths and other incidents in Afghanistan were controversially published by the site in July.

According to the Guardian, the Iraq logs detail how US authorities allegedly failed to investigate hundreds of reports of abuse, torture, rape and murder by Iraqi police and soldiers.

There are “numerous” reports of detainee abuse, describing prisoners being shackled, blindfolded and hung by wrists or ankles and subjected to whipping, punching, kicking or electric shocks with six ending with a detainee’s apparent death, the paper reported.

The documents reportedly show that more than 15,000 civilians died in previously unknown incidents.

The newspaper said the logs contain multiple reports of the abuse of detainees by coalition soldiers though they are neither as clear nor as alarming as the evidence of abuse by Iraqi forces.

Because they record the activities of the US military, they hold few references to British handling of detainees.

Both men had injuries that were consistent with their stories. There is no record of any formal investigation.

Another log, dated September 2 2008, records that a civilian interrogator working with the Americans reported that British soldiers had dragged him through his house and repeatedly dunked his head into a bowl of water and threatened him with a pistol. The log claims that his story was undermined by inconsistencies and an absence of injuries.

The 391,831 documents date from the start of 2004 to January 1, 2010, providing a ground-level view of the war written mostly by low-ranking officers in the field.

A spokesman for the Ministry of Defence said last night: “If any new evidence comes to light as a result of this information we will consider it.”

He highlighted the fact British military involvement in Iraq was currently being scrutinised through the Iraq Inquiry and the Baha Mousa Inquiry.

Personal details and information about the deaths are set out, in contrast with US and UK officials’ insistence that no official record of civilian casualties exist.

“By very careful sampling, we have been able to estimate that these logs will add 15,000 deaths previously unknown to the Iraq death count.”

He argued it was in the “public interest” for every possible detail about the “public tragedy” of the people who died in Iraq to be known.

Pentagon spokesman Marine Corps Colonel Dave Lapan said: “We deplore WikiLeaks for inducing individuals to break the law, leak classified documents and then cavalierly share that secret information with the world, including our enemies.

“We know terrorist organisations have been mining the leaked Afghan documents for information to use against us, and this Iraq leak is more than four times as large.

“The only responsible course of action for WikiLeaks at this point is to return the stolen material and expunge it from their websites as soon as possible.”

The group also said it would publish 15,000 more documents about the war in Afghanistan.

Kristinn Hrafnsson of WikiLeaks said the files, which had been held back in July because of their sensitive content, were fully vetted for release.

They had been edited to conceal people’s names and “contain no information that could be harmful to individuals”.

Mr Shiner demanded a public inquiry into allegations that British troops were responsible for civilian deaths during the Iraq War.

He cited one case in which he claimed a British rifleman had shot dead an eight-year-old girl who was playing in the street in Basra.

He said tank units were in the habit of stopping while on patrol so soldiers could hand out sweets to youngsters as part of the battle for “hearts and minds”.

Mr Shiner explained: “For some reason the tank stopped at the end of the street, she’s there in her yellow dress, a rifleman pops up and blows her away.”

Regarding the American documents he said: “It would be wrong to assume this had nothing to do with the UK.”

He said he was acting for many Iraqi civilians who were killed or tortured by UK forces.

He said: “Some have been killed by indiscriminate attacks on civilians or the unjustified use of lethal force.

“Others have been killed in custody by UK forces and no-one knows how many Iraqis lost their lives while held in British detention facilities.”

He said he simply did not know how many Iraqis had died while in British detention.

He added: “If unjustified or unlawful force has been used, prosecutions for those responsible must follow, so we are bringing forward a new case seeking accountability for all unlawful deaths and we argue that there must be a judicial inquiry to fully investigate UK responsibility for civilian deaths in Iraq.”