The Hungarian government sends those people back to live in a contaminated environment:

– Hungary’s toxic flood could turn into a cancerous cloud (Telegraph):

Thousands of Hungarian residents battling to contain the flood of poisonous red sludge have been warned to wear face masks because as the slurry dries it will turn into a toxic dust cloud.

Environmentalists said high levels of arsenic and mercury, which can cause cancer, had been found in water polluted by the ooze and that, if airborne, this could enter the human respiratory system.

The scale of the pollution – where 180 million gallons escaped from an industrial reservoir – has been compared with the BP oil spill in the Gulf of Mexico, a leak of 200 million gallons.

A week after around one million cubic metres of red sludge escaped from a Hungarian alumina factory, an analysis commissioned by the environmental group Greenpeace has revealed that more than 50 tonnes of arsenic may have been released as a result of the spill.

In addition to containing almost twice as much arsenic (110 milligrams per kilogram dry mass) as expected for the red mud resulting from aluminium oxide production, the concentrations of mercury and chromium are also relatively high, says chemist Herwig Schuster, chief Greenpeace campaigner for Central and Eastern Europe. “Because arsenic is readily soluble we might be in for a major groundwater problem,” he adds.

Schuster says that Greenpeace’s figures suggest that the drinking water supplies of at least 100,000 people could be affected by potentially toxic levels, including inhabitants of the city of Györ downstream of the contaminated rivers. Exactly how fast and far the contamination will spread depends on the permeability of local soils — which scientists have not yet assessed.
Although small amounts of arsenic in bauxite sludge might have accumulated over time, “If that [Greenpeace] sample is representative there is no question that industrial wastes have been mixed in the basin,” says Weiszburg.

Greenpeace also suspects that the leaked basin may have contained toxic waste besides the sludge from aluminium oxide production.

Government officials said Friday that 600,000 to 700,000 cubic meters (158 million to 184 million gallons) of sludge escaped and inundated three villages before entering the Danube.

The sludge is ‘slightly’ RADIOACTIVE and inhaling its dust can cause LUNG CANCER:

Sounds like it is safe to return, doesn’t it? 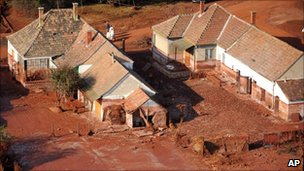 Homes in the village of Kolontar were among the worst affected

The Hungarian alumina plant which caused a toxic sludge leak has reopened as villagers forced to abandon their houses begin to return home.

Dozens of homes in the western village of Kolontar, the closest to the plant, were made uninhabitable by the sludge.

Nine people died following the 4 October spill that devastated towns and rivers in the west of the country.

Some 30 people were taken to Kolontar from the nearby town of Ajka, where evacuated residents had been staying.

The plant of the Aluminium Production and Trade company (MAL Zrt) restarted its operations on Friday.

The state commissioner – now in charge of MAL Zrt’s operations after the government took control of the plant earlier this week – said in a statement: “It will take a maximum four days for the plant to go back to normal operation.

“Next Tuesday, production will be up to full capacity.”

The plant will remain under state control for up to two years.

A criminal investigation continues into whether the owners followed safety regulations and whether they knew of warnings that the waste reservoir might collapse.

About 150 people were injured after up to 700,000 cubic metres (24.7m cu ft) of toxic by-product from the production of alumina burst from the storage reservoir last week. The residue covered an area of 40 sq km (15.6 sq miles).

Over the past few days, a system of dykes has been constructed to protect Kolontar from a possible second spill.

On Friday, a total of 700 were eventually expected home in the village. They will live on the higher ground, further from the path of the tide of mud from the broken reservoir.

“I was born in Kolontar and I am going to die here, I have never thought about leaving,” 84-year-old Ferenc Farkas said as he boarded one of the waiting buses.

But others were less keen to return home.

Police roadblocks remain in place in and around Kolontar, and no journalists are allowed into the village, reports say.

Residents of the nearby town of Devecser, home to some 5,400 people, were also returning to their properties. But many remained wary as winter approaches.

“I do not know what we are going to do, it is getting so cold,” 64-year-old Janosne Horvath, whose house was destroyed by the toxic sludge, told AFP.

“We are too scared to stay here overnight. I am actually scared for my life.”

Environmental group Greenpeace has criticised the decision to allow people to return, saying it was “irresponsible… because the exact causes of the accident have not yet been determined”.

One Hungarian bank has announced that it will put a six-month freeze on mortgage payments from victims of the disaster, according to AFP.

The alumina plant which caused the leak will remain under state control for up to two years.