“If it is not stopped quickly, this disorder which is aimed at paralysing the country could have consequences for jobs by damaging the normal running of economic activity,” the President said in a statement yesterday.

“This is a severe blow for an industry that was just recovering from the (economic) crisis,” he told the Daily Telegraph. He said a little over half of the losses were due to a strike at Marseille’s Fos-Lavera port, where dozens of petrol tankers are unable to offload.

The president of France’s Assemblée of chambers of commerce and industry, Jean-François Bernardin, said that “tens of thousands” of businesses had been hit by the strike action, due to lack of fuel and transport disruption, while SNCF, the national rail operator said it was losing 20 million euros (£17.5 million) a day.

But workers in several key sectors showed no sign of ending a week-long strike against a plan to raise the legal retirement age from 60 to 62, which the government has said is essential to reduce France’s public deficit.

• All 12 refineries and some fuel depots are blockaded 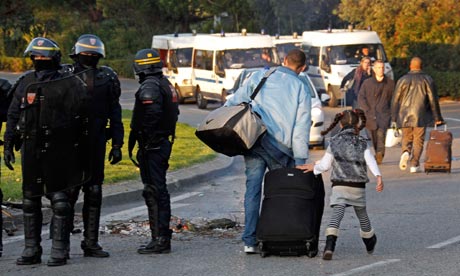 France faced another day of panic at the petrol pumps as refinery and oil depot protests continued despite government attempts to break the blockades over pension reforms. A quarter of the country’s petrol stations have run dry amid fears over how people would get away for the long half-term break that starts tomorrow. North and western France were the worst hit.

All of France’s 12 refineries and around 14 of its 219 fuel depots remained blockaded this morning. However, the environment minister, Jean-Louis Borloo, said the situation was “tending towards improving”.

The French president, Nicolas Sarkozy, yesterday ordered police to break up blockades at depots and a handful were lifted. But in towns including Caen and Ouistreham, as soon as depot blockades were dismantled there was panic-buying at local petrol pumps. Police could move in today to break the 10-day blockade of refineries.

Public transport in many major cities, including Paris, was running almost as normal this morning, although sporadic strike action continued in some parts of the country, including a three-hour blockade of Marseille airport.

Unions will meet this afternoon to decide whether to call another day of national strikes next week to stop the movement petering out over the school holidays. Moderate unions are doubtful about continuing the protests, with the senate due to vote in favour of the contested pensions bill by tomorrow night. But more hardline unions favour calling for another nationwide day of stoppages and street demonstrations, possibly next Tuesday or Thursday.

Bernard Thibault of the powerful communist-backed CGT union vowed to continue. “There’s no possible way out of this because the government is intransigent,” he told RMC radio. “There’s no reason to stop these protests.” He said he would call for people to stage further walkouts and “descend onto the streets”.

Sixth-form students will meet university students this afternoon to decide how to maintain momentum during the half-term break. University students, who have no break, have begun blockading faculties in support.