There are not much choices left:

–  Three Horrifying Facts About the US Debt ‘Situation’:

Timothy Geithner, the US Treasury Secretary, said the United States would not engage in a currency war by devaluing the dollar to boost the country’s flagging economy. 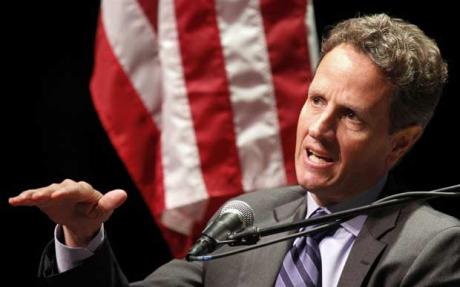 Timothy Geithner, the US Treasury Secretary, when asked how much higher China should allow the yuan to rise, replied: ‘Higher.’ Photo: Bloomberg

“It is very important for people to understand that the United States of America and no country around the world can devalue its way to prosperity, to [be] competitive,” he said. “It is not a viable, feasible strategy.”

The dollar strengthened against a basket of currencies after his comments to business leader in California’s Silicon Valley on Monday, including the yen, euro and sterling.

This is the first time since February that Mr Geithner – who helped create the “strong dollar mantra” in the 1990s – has broken his silence on the weakening US currency.

It also comes ahead of this weekend’s meeting of finance leaders from the Group of 20 wealthy and emerging nations in South Korea, which is expected to be overshadowed by a dispute between China and the US over the valuation of the yuan and growing fears of protectionist currency wars.

The weak dollar has already led export-focused Japan to launch an unsuccessful intervention to strengthen the yen, while Brazil has warned that an “international currency war” was hurting his country’s competitiveness – a weak dollar causes more funds to flow into Brazil and other emerging market economies, pushing up currencies.

The dollar has fallen 7pc since late August when Fed chairman Ben Bernanke hinted at the possibility of fresh stimulus to stoke the world’s largest economy.

Answering audience questions before the Commonwealth Club of California in Palo Alto, he said the US needed to “work hard to preserve confidence in the strong dollar.”

On Friday, the dollar index hit a 10-month low against a basket of major currencies, while the greenback has been plumbing fresh 15-year lows against Japan’s yen.

Brazil on Monday moved to cool a strong rally in its currency by raising taxes for foreigners buying local bonds and trading in foreign exchange derivatives.

Finance Minister Guido Mantega said the move was aimed at reducing foreign investment into Brazil, and he urged other countries to take coordinated action against the weak dollar.

Argentina’s Minister of Economy and Public Finance Amado Boudou on Monday called on developed nations to focus on creating jobs rather than actions that weaken their currencies, saying a “true currency war” was underway.

However, the US say the problem is China’s restrictive exchange rate regime, which until recently had kept the yuan largely pegged to the dollar. It wants China to allow the value of the yuan to rise.

On Friday, Mr Geithner delayed a report about whether the yuan’s value is being manipulated, saying instead that he wants to work through the G20 process to hash out a multilateral solution.

Asked how much higher China should allow the yuan to rise, he said: “Higher.”

On whether the dollar would lose its status as the world’s reserve currency, the Treasury chief said: “Not in our lifetime.”

Officials hint Fed on the verge of more easing 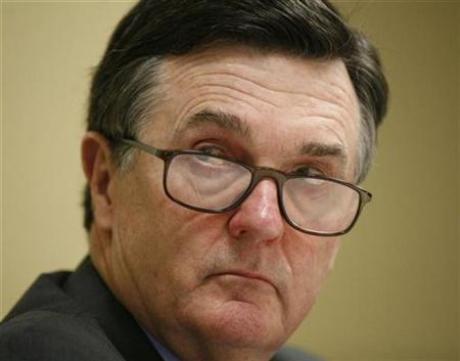 CEO of the Federal Reserve Bank in Atlanta Dennis Lockhart listens during a presentation at the American Economic Association Conference in Atlanta, Georgia

WASHINGTON (Reuters) – A string of Federal Reserve officials on Tuesday indicated the central bank will soon offer further monetary stimulus to the economy, with one saying $100 billion a month in bond buys may be appropriate.

While internal differences on the unconventional policy are still evident, the consensus view at the Fed appears to be that the economy is weak enough to warrant further support, most likely through increased purchases of Treasury debt.

The U.S. economy is expected to have grown just 1.9 percent in the third quarter, a level considered too low to bring down unemployment. The debt purchases would help lower long-term interest rates in the hope of boosting demand.

Investors, who are parsing any and all Fed communication for clues on the central bank’s next move, heard from a flurry of Fed officials on Tuesday.

Atlanta Fed President Dennis Lockhart’s willingness to cite a specific dollar figure for purchases, one largely in tandem with market expectations, was seen as another hint that planning is actively underway.

“If we’re going to pursue another round of quantitative easing, it has to be a large enough number to make a difference,” Lockhart said in an interview on CNBC television.

“As a monthly number ($100 billion) is fairly consistent with what we did before, and so I think it would certainly be in the range of numbers one might consider … but if you were talking about $100 billion as simply the overall program, I think that’s too small,” he said.

The Fed cut interest rates to near zero during the financial crisis and then bought around $1.7 trillion of mortgage-related and Treasury debt to further push down borrowing costs.

The Chicago Fed’s Charles Evans and New York Fed chief William Dudley stuck to their views that monetary policy can and should do more to support the recovery, unless the economy improves.

Dudley said both inflation and employment are likely to remain below levels that are consistent with the Fed’s mandate.

“Viewed through the lens of the Federal Reserve’s dual mandate — the pursuit of the highest level of employment consistent with price stability, the current situation is wholly unsatisfactory,” Dudley said, repeating an argument he made earlier this month.

The hints of forthcoming stimulus were not enough to soothe U.S. stocks, which were down sharply on the day after an interest rate hike in China sparked concerns about the outlook for global growth.

The prospect of further Fed easing, which helped push the dollar to a 10-month low, has drawn the ire of emerging market economies contending with a flood of capital as investors chase higher yields. The dollar surged on Tuesday after the surprise Chinese central bank interest rate increase.

The view that further stimulus was needed appears to be the core view at the central bank, but it is a view not unanimously held.