The return of students and workers in mass protests made the right shiver. But there was no battle of the barricades 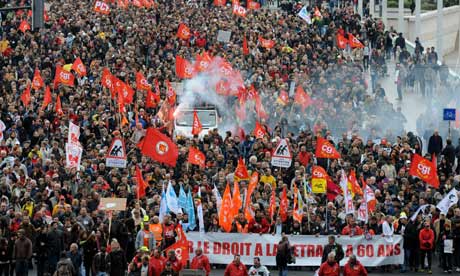 The clouds hung heavily over the Place de la République and the statue of Marianne, France’s heroine, was draped with demonstrators’ balloons.

As protesters marched on the historic Parisian site of proletarian revolt, 17-year-old Romane scowled at the rain-filled sky. “At least this is proof we’re not just here for the good weather,” she said. On her jacket was pinned a placard scrawled with marker pen. “Carla, we’re like you,” it read. “We’ve been screwed by Sarko too.”

Nicolas Sarkozy had feared that the rentrée – the time after the holidays when France returns to normal – would be warm, encouraging protesting masses on to the wide, Haussmann-designed boulevards, and he was right to be worried.

Languishing in the polls and engaged in an almighty battle to push through his flagship pension reform – taking the retirement age from 60 to 62 – the man once cast by some as the Gallic Margaret Thatcher is facing his most testing showdown with the notoriously bellicose unions.

The demonstration that drew people out in their hundreds of thousands was the fifth since last month, and Tuesday will bring another. Last week the protest movement snowballed, with strikes that closed schools, led to flights being cancelled and stopped trains. Fuel refineries halted production and parts of the country are already suffering shortages.

The pipeline supplying fuel to Charles de Gaulle airport was running again last night, having been down for several hours. “We have been able to get the supply of fuel to Paris airports started up again… which makes the threat of a shortage at Roissy-Charles de Gaulle distant,” said Patrick Gandil, head of the civil aviation authority.

For Sarkozy, the next seven days will be crucial, some say the most important of his presidency. The Senate is expected to vote on the pensions bill on Wednesday, and it is likely to be ratified by the end of the month. Yet the pressure on the government remains strong. “The government does not want to budge, but there could end up being a gulf between what it wants and what it has to do,” said Pierre Bréchon of Sciences Po University in Grenoble. “It is not possible to predict who will be the winner in a conflict like this. We will only know that once it is over.”

At the demonstration, Romane disagreed. “We will keep this up, and we will get something for it,” she said. “With all this mobilisation, if they don’t listen to us there’s a big problem in our country.” The teenager was one of a legion of school pupils who joined protests last week with a zeal that sent a shiver down the spine of the rightwing establishment – for which a vision of students linking arms with workers recalled visions of protests past.

Since 1968, governments have been forced to cave in on reforms because of the volatile presence of la jeunesse dans la rue. “We could have another May 1968,” sociologist Michel Fize told Le Parisien last week. “The situation now resembles it. A big social movement is perhaps emerging.”

So far the reality has not lived up to these predictions. Hamstrung by a law passed within months of Sarkozy’s election, guaranteeing minimum service on public transport and making every strike day a no-pay day, the grèves, or days of action, have not paralysed the country. In their severity, the disruptions to the refineries are the exception rather than the rule.

Yet to negate the movement’s significance would be a mistake. It is by far the biggest industrial action Sarkozy has experienced since coming to power. For the man who vowed to drag France along the path to market reform, the showdown is a vital test. Will he push through a reform he argues is essential for the future, or will the potent blend of worker anger and youth revolt force a climbdown? “Even if he wins this, I think it could be a pyrrhic victory,” said Jacques Reland of the London-based Global Policy Institute, one of many who believe the protests will contribute to a difficult re-election year for the president in 2012. He may win this battle, they say, but he may well not win the war.

“For us this is a protest not only against the pension reform but also against the wider politics of this government – politics that favour those who are already favoured by society,” said 21-year-old Cécile Rimboud yesterday. Another protester, a man in his 70s, said at the Tuesday manif that he was not just protesting against the reform, but against a rightwing president who, from the beginning, “chose his side – the well-off”. Their comments are telling. For while polls show most people recognise the flabby pension system needs reform, what they accuse Sarkozy of is pushing through changes that are unfair.

This, they say, gels with the man they have come to know over the past three years: a leader who panders to the chosen few and turns the screw on the masses. That the man pushing through the reform, labour minister Eric Woerth, spent the summer engulfed in a scandal surrounding France’s richest woman and her huge tax rebate has rubbed salt in the wound. “There is a sense of injustice and also a sense that the priorities are all wrong,” said Reland. “That sense is, I think, spreading through Europe.”

There is no doubt that the standoff is being watched by governments and unions across Europe – all of which face similar challenges brought on by the long-term pressure of demography and the short-term pressure of budget holes deepened by the financial crisis.

With its frequent demos, feisty unions and semi-resurgent left, France’s opposition may appear to have the best shot in Europe at victory over measures to raise retirement ages and extend contribution periods. But branding it a model battle would be wrong, say observers, arguing that the unions came too late to the fight and that the Socialist party has failed to provide a coherent opposition.

Despite the optimism on the streets, time is on Sarkozy’s side and the standoff is likely to go in his favour. His supporters hope he will then be able to re-establish himself as a leader who can walk the walk and not just talk the talk. But he will feel no warmth from the people on the boulevards. “He has to listen to us,” said Marcel, 32, a state employee. “If he doesn’t, we will make him pay.”