– Botox May Deaden Not Just Nerves, But Emotions, Too (Discover Magazine)

– Botox paralyzes your emotions, too (MSNBC)

Study: Facial freezer limits both ability and reason to frown

“The drug is a purified form of botulinum, one of the most toxic substances in the world.” 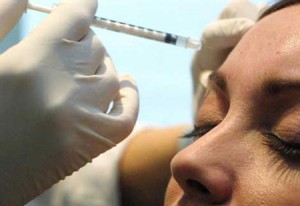 WASHINGTON – Federal health officials approved the wrinkle-smoothing injection Botox for migraine headaches on Friday, giving drugmaker Allergan clearance to begin marketing its drug to patients with a serious history of the condition.

The Food and Drug Administration approved the drug for patients who experience 15 or more days of migraine headaches per month. Allergan, which specializes in beauty and eye-care drugs, said roughly 3.2 million people in the U.S. have chronic migraines.

For the new use, doctors are directed to inject patients in the neck or head every 12 weeks to dull future headaches.

Doctors currently use a wide variety of medications to treat migraines, ranging from over-the-counter painkillers like Advil to prescription narcotics like codeine. Many patients also respond to changes in diet or lifestyle, such as reducing caffeine or stress.

“This condition can greatly affect family, work and social life, so it is important to have a variety of effective treatment options available,” said FDA’s Dr. Russell Katz, director of neurology products, in a statement.

Botox, which was introduced in 1989, is one of Allergan’s top drugs, accounting or more than $1.3 billion of the company’s $4.4 billion sales in 2009. The drug is most famous for its ability to smooth frown lines on aging foreheads, but it’s also approved to treat neck spasms, eye muscle disorders and excessive underarm sweating.

The drug won approval earlier this year to treat spasms in the elbows, wrists and fingers. But it’s also widely used off-label to treat broader movement disorders such as cerebral palsy. Botox works by blocking the connections between nerves and muscle, temporarily paralyzing the muscle. The drug is a purified form of botulinum, one of the most toxic substances in the world.