“Earlier Friday under cross examination, Pfc. Lance Aviles said he used his cell phone to record the rampage inside the processing center but was ordered by an officer to delete both videos later the same day. Aviles was NOT asked if he knew why the officer ordered the videos destroyed.” 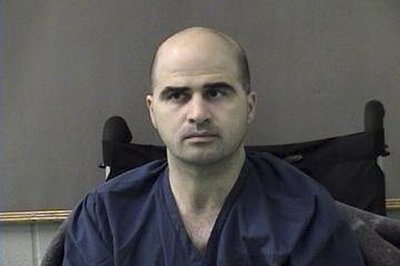 Oct. 15 – FORT HOOD, Texas – As dozens of soldiers lay dead or bleeding in a Fort Hood processing center last year, a gunman went outside and continued firing as others ran to nearby buildings, hid behind cars or carried wounded comrades to safety, witnesses told a military court Friday.

Chief Warrant Officer II Christopher Royal said he ran out of the center where soldiers were preparing to deploy after he heard gunshots and saw the shooter, but then decided to go back and try to stop the rampage, because “I told myself I could not let him get away with it.”

Royal testified Friday during an Article 32 hearing that will determine whether Maj. Nidal Hasan should stand trial in the Nov. 5 shootings on the Texas Army post. The 40-year-old American-born Muslim has been charged with 13 counts of premeditated murder and 32 counts of attempted premeditated murder. The hearing is to resume Monday.

Crouching behind a car while deciding how to take the gunman “by surprise,” the unarmed Royal saw a soldier run out of the back door and then fall face-down in the grass after the man chased and shot him, he testified. The shooter later started firing at Royal, who then ran to a nearby building to warn others to stay inside — and then realized he had been shot in the back, Royal said.

Sgt. Lamar Nixon testified Friday that after he escaped and ran into a nearby building, he and another soldier “bolted back out” and picked up a wounded comrade even though they still heard gunfire.

Nixon said he recognized Hasan as the gunman. Nixon, who worked in the building where soldiers must get vaccines and other routine medical tests before deployment, said Hasan had been there two or three times, including the morning of Nov. 5. Hasan had been at the center earlier to get vaccines because he was to be deployed the following month, but he did not respond when Nixon greeted him, the soldier testified.

Nixon said he remembered Hasan because of “his stature and just how he composed himself — stoic.” The next time Nixon saw Hasan, it was after lunch when the psychiatrist stood from behind a front counter and began shooting after yelling “Allahu Akbar!” — “God is great!” in Arabic, Nixon testified.

Twenty-nine witnesses over three days have appeared in the courtroom or by video link. They have given similar accounts of how the rampage began, saying Hasan fired into a crowded waiting area and then walked around the building, shooting people as they hid under chairs and tables, pausing only to reload.

Some witnesses testified that Michael Grant Cahill, a civilian physician assistant, and Capt. John Gaffaney, a psychiatric nurse preparing to deploy to Iraq, each were fatally shot after picking up chairs to try to stop Hasan.

Only one witness has testified he saw two weapons. Others have said they saw one weapon, but descriptions about the gun have varied.

Addressing the court via video link from Afghanistan Friday, Spc. Megan Martin said the gunman was “shooting everything that moved.” She was part of the 467th Medical Detachment, the combat stress unit Hasan was supposed to deploy with.

Immediately after the shootings, reports emerged that Hasan had been trying to get out of his pending deployment because he opposed the wars in Iraq and Afghanistan. He had been saying goodbye to friends and neighbors, and had given away his Quran and other belongings.

Hasan’s lead attorney John Galligan asked Martin on Friday if the tragedy could have prevented her from deploying to a combat zone.

“I wanted to carry on with the mission, sir, as my fallen soldiers would want me to,” she said.

Earlier Friday under cross examination, Pfc. Lance Aviles said he used his cell phone to record the rampage inside the processing center but was ordered by an officer to delete both videos later the same day. Aviles was not asked if he knew why the officer ordered the videos destroyed.

It’s unclear exactly what the footage showed, although it could have been used as evidence in the case. Prosecutors have not said whether they’ll seek the death penalty if the case goes to trial.

Hasan, who was paralyzed after Fort Hood police shot him that day, remains jailed in the Bell County Jail, which houses suspects for nearby Fort Hood. The military justice system does not have bail for defendants.