The exotic birds and animals of the tropics are disappearing at a catastrophic rate as the rich world strips poor countries of their natural resources, the WWF has warned. 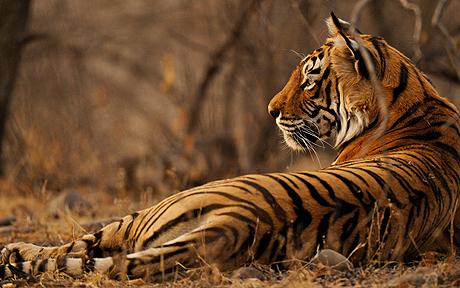 The tiger is dying because of two centuries of crime, greed, political apathy and corruption Photo: Alamy

The World Wildlife Fund (WWF) found wildlife in the tropics has declined by 60 per cent since 1970.

Iconic species like tigers, turtles, gorillas and hundreds of birds such as the white-rumped vulture are in danger of going extinct, as well as thousands of lesser-known animals.

Freshwater species in the tropics are down a disastrous 70 per cent, with animals like the Amazon river pink dolphin already dying out.

The report blamed the rate of human consumption, that has doubled in under fifty years, meaning rainforests are being cut down, the seas overfished and grassland ploughed up for farming.

The ‘Living Planet Index’ found that the numbers of 2,500 species in 8,000 populations around the world has fallen by 30 per cent.

However wildlife in temperate climates has actually increased by 30 per cent in the last 40 years, as countries like Britain seek to protect species.

David Nussbaum, Chief Executive of WWF UK, said the disparity was caused by the rich world plundering the resources of the poor world, while protecting the environment in their own backyard.

He warned that if the trend continues the world will run not only run out of natural resources but damage the ‘ecosystem services’ such as water cycles and clean air all humans rely on.

“The loss of biodiversity and habitats undermines the natural systems upon which we depend for the food we eat, the air we breathe and the stable climate we need. The depletion of natural resources poses a major risk to our economic security because scarcity of resources and degraded natural systems will increase the price of food, raw materials and other commodities – for both producers and consumers,” he said.

The WWF calculated the ‘ecological footprint’ of each country by measuring the amount of carbon, water and other resources consumed by an average person.

Overall the world is using 50 per cent more of the planet’s resources than the world can supply.

Rich countries like Britain are using three times the amount of resources than the planet can sustain, while countries in Africa use a fraction of what they are entitled to.

Mr Nussbaum said people in rich countries are consuming more because most of the food and products in the home are now manufactured from raw materials found in the tropics. For example green beans flown from Kenya, or cotton shirts manufactured in Bangladesh.

There is also a new trend for ‘land grabbing’, where rich countries with a high ecological footprint are buying up huge areas of the poor world to grow crops because they have run out of food and water.

At the same time, he said Governments should be moving towards a green economy where energy is generated from wind or solar so that people have a lower carbon footprint and are having less impact on the rest of the world

“We have to recognise that our responsibility to the planet is not just about protecting the nature where we live but protecting nature around the world and making sure everybody can benefit from what nature provides for us,” he said.