Cancer is a modern man-made disease caused by the excesses of modern life, a new study suggests. 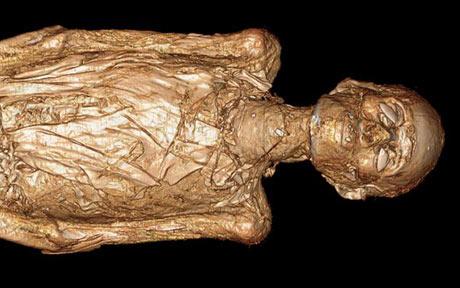 Researchers looking at almost a thousand mummies from ancient Egypt and South America found only a handful suffered from cancer when now it accounts for nearly one in three deaths.

The findings suggest that it is modern lifestyles and pollution levels caused by industry that are the main cause of the disease and that it is not a naturally occurring condition.

The study showed the disease rate has risen dramatically since the Industrial Revolution, in particular childhood cancer – proving that the rise is not simply due to people living longer.

Now it is hoped that it could lead to better understanding of the origins of cancer and to new treatments for the disease which claims more than 150,000 lives a year in the UK alone.

“In industrialised societies, cancer is second only to cardiovascular disease as a cause of death,” said Professor Rosalie David, a biomedical Egyptologist at the University of Manchester.

“But in ancient times, it was extremely rare. There is nothing in the natural environment that can cause cancer. So it has to be a man-made disease, down to pollution and changes to our diet and lifestyle.

“Cancer appears to be a modern disease created by modern life.”

To trace the origins of cancer, Prof David and colleague Professor Michael Zimmerman, looked for evidence of the disease in hundreds of mummified bodies dating back up to 3,000 years and also in fossils and ancient medical texts.

Despite tried and tested techniques of viewing rehydrated tissue under the microscope they found that only five cases of tumours, most of which were benign.

They did find examples of other modern day aged related diseases such as hardening of the arteries and arthritis, which they said dismissed the argument that ancient humans did not live long enough to develop cancer.

The mummified bodies from both rich and poor backgrounds showed that the average life expectancy ranged from 25 to 50, depending on their background.

Evidence of cancer in ancient Egyptian texts is also “tenuous”, the researchers claimed, with cancer-like problems more likely to have been caused by leprosy or even varicose veins.

The only diagnosis of cancer was a case in an unnamed mummy, an “ordinary” person who had lived around 200AD.

Modern records show that the disease rate has risen massively since the Industrial Revolution, in particular childhood cancer.

Prof Zimmerman said: “In an ancient society lacking surgical intervention, evidence of cancer should remain in all cases.

“The virtual absence of malignancies in mummies must be interpreted as indicating their rarity in antiquity, indicating that cancer causing factors are limited to societies affected by modern industrialisation.”

Dr. Zimmerman dismissed arguments that tumours may have disintegrated over time. His experimental studies indicated that if anything they are better preserved than normal tissues.

As the team moved through the ages, it was not until the 17th century that they found descriptions of breast and other cancers.

Scrotal cancer in chimney sweeps occurred in 1775, nasal cancer in snuff users in 1761 and Hodgkin’s disease in 1832.

Prof David said: “Where there are cases of cancer in ancient Egyptian remains, we are not sure what caused them.

“They did heat their homes with fires, which gave off smoke, and temples burned incense, but sometimes illnesses are just thrown up.”

“Yet again extensive ancient Egyptian data, along with other data from across the millennia, has given modern society a clear message – cancer is man-made and something that we can and should address.”

“About one in three people in the UK will get cancer so it is fairly commonplace in the modern world.

“Scientists now say a healthy diet, regular physical activity and maintaining a healthy weight can prevent about a third of the most common cancers so perhaps our ancestors’ lifestyle reduced their risk from cancer.”

But Jessica Harris, senior health information officer at Cancer Research UK, said it was wrong to suggest that cancer was purely man-made.

“It can be tempting to worry about our cancer risk from external things like pollution and chemicals more than from things we can control, like our lifestyles,” she said.