“Queen Elizabeth has canceled a planned Christmas party at Buckingham Palace after deciding it would be inappropriate to celebrate as ordinary Britons feel the pinch from tough economic times.”

–  Queen Tried to Use State Poverty Fund to Heat Buckingham Palace (The Independent):

Yes, these are though times, but not for the Royals! 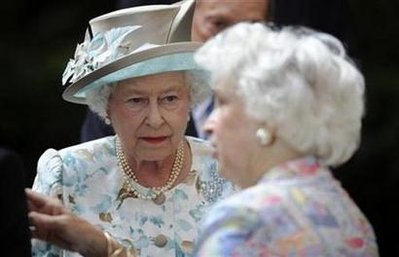 LONDON (Reuters Life!) – Queen Elizabeth has canceled a planned Christmas party at Buckingham Palace after deciding it would be inappropriate to celebrate as ordinary Britons feel the pinch from tough economic times.

The royal household thought the event, paid for by the Queen herself and usually staged every two years, would be unseemly as Britons cope with deep public spending cuts to bring down a record peacetime budget deficit.

“The queen is acutely aware of the difficult economic circumstances facing the country,” a palace spokeswoman said on Thursday.

“It’s the first time in memory the party’s been canceled,” one unnamed worker told the Sun. “We’re all devastated as it’s a great night when everyone lets their hair down.

“It’s normal to see the Queen dancing with a footman or Prince Philip waltzing with a maid.”