Winter will come early to Britain next week as snow is forecast for the north while the south will shiver in frosty sub-zero nights. 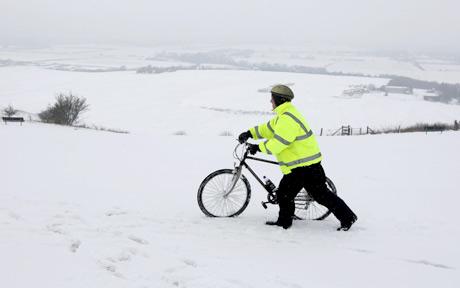 Forecasters warned snow is due in Scotland and possibly northern England next week, with frost as far south as southern England, which will see bitter 48F (9C) daytime maximum temperatures.

“A northerly air stream in the middle part of next week means coldest conditions will probably be in Scotland, with sleet or snow showers and snow settling on higher ground,” said forecaster Brian Gaze of independent forecasters The Weather Outlook.

The Weather Outlook, which has an accurate seasonal forecasting record, warned the UK is now being gripped by a bitter series of winters comparable with the harsh 1939-42 winters which made conditions so horrendous during the Second World War.

Last winter was the coldest for 31 years, with an average UK-wide temperature of just 34F (1.5C).

“History shows cold winters do tend to come in clusters, indicating underlying factors cause them to persist for a number of years.

“But we expect the third colder than average winter in succession this winter, with very sharp cold spells bringing heavy snow and severe frost.”

Mr Gaze told the western half of the UK to brace for heavy snow – while the eastern half freezes in temperatures as low as 5F (-15C).

“The weather pattern may be different this winter, with cold air from the east or south-east, rather than north east,” he said.

“The heaviest snowfall occurs on the boundary between cold, dry air from the east and mild, moist air from the Atlantic – so it would not be a surprise to see the west of the UK having heavy snowfalls.