A total of $69 million (£43 million) paid to welfare recipients in California was spent on holidays, including gambling trips to Las Vegas, jaunts to Hawaii and pleasure cruises. 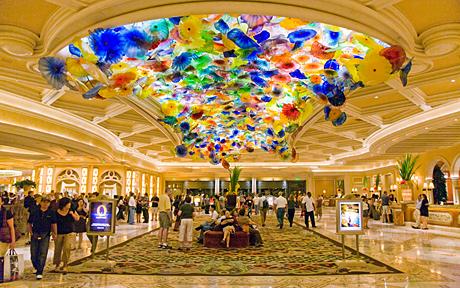 The Bellagio in Vegas. Tens of thousands of dollars had been withdrawn using aid cards from a cash machine on the Las Vegas Strip Photo: ALAMY

The money, which is meant to be to help the poorest people in the state pay rent and feed their children, was found to have been used by them in restaurants, hotels and shops.

Those on welfare can spend their benefit money using “aid cards,” which can also be used in cash machines.

When records for the last three years were examined it was found that the cards had been used in 49 other states across the US.

The records were obtained from the state’s Department of Social Services by the Los Angeles Times newspaper.

They showed that $11.8 million (£7.4 million) had been spent in Las Vegas, Nevada, more than anywhere else outside California. That included purchases at the Venetian and Tropicana casino hotels.

Tens of thousands of dollars had been withdrawn using aid cards from a cash machine next to the upmarket Encore casino on the Las Vegas Strip.

Hundreds of thousands of dollars more were spent in Hawaii, including at Waikiki Beach, and on a Hawaiian island which is home to nothing but an expensive Four Seasons hotel.

More money was withdrawn from cash machines near Disney World in Florida and on cruise ships, including ones sailing from Rio de Janeiro and Beijing Those on welfare in California are allowed to leave the state and are not investigated by authorities unless they have been gone for more than 30 days.