Ireland Cancels All Remaining 2010 Bond Auctions Due To Market “Turbulence”

Apparently in Ireland, a global stock market that surges up 10% in a month to celebrate the latest obliteration of the purchasing power of the American middle class is considered “turbulence.” This is precisely the excuse given by Irish PM Brian Cowen when asked why he has cancelled all bond auctions for the rest of the year. Surely, the market is buying it. Cowen also added that he doesn’t need funds at rates of 6.8 to 6.9%. What is hilarious is that he will need the funds much more in 3 months when the rates are double that, now that the country is openly nationalizing each and every bank, and will fund these “acquisitions” with tens of billions it doesn’t have.

Irish Prime Minister Brian Cowen  said that his government decided to cancel bond auctions for the rest of the year because of “turbulence” in bond markets, and the state is already funded into next year. He made the comments in an interview with national broadcaster RTE.

“We are funded until next May,” Cowen said. “There has been such turbulence in the markets, since we don’t require those funds immediately why would we be going to get funds at rates such as 6.8 or 6.9 percent.”

(I could not find this Bloomberg article anymore. ???) 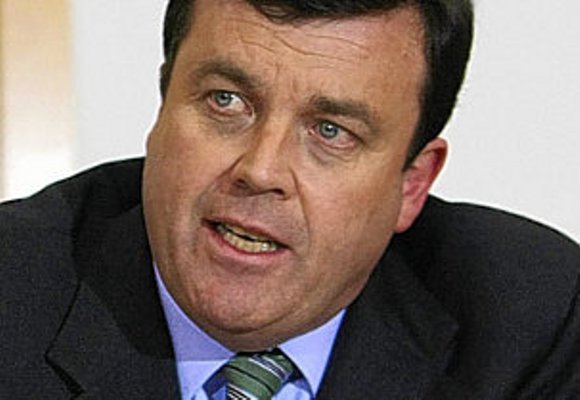 Oct. 1 (Bloomberg) — It must feel like deja vu for taxpayers and investors in Ireland.

Finance Minister Brian Lenihan said yesterday he cleaned up the mess left by “reckless” bankers. Now he has to turn back to tackling the largest budget deficit in the history of the euro region after the premium bondholders demand to buy Irish debt climbed to a record this week.

“It’s a bit like groundhog day, like you’ve been on the wrong road and have to come back and start all over again,” said Alan McQuaid, chief economist at Bloxham Stockbrokers in Dublin. “It’s a long way home.”

Ireland was among the first countries to react to the global credit crisis, avoiding going the way of Iceland, or later Greece, by bolstering its banks and then cutting spending and raising taxes. As what was Europe’s fastest-growing economy as recently as 2006 buckles under the weight of bank debt, the nation once more is trying to stave off financial ruin.

The government is taking control of Allied Irish Banks Plc and injecting extra cash into the previously nationalized Anglo Irish Bank Corp., raising the cost of the rescue to as much as 50 billion euros ($68 billion), Lenihan said yesterday.

“The Irish people are entitled to be angry with the bankers, who lent recklessly over a considerable period of time in the earlier part of this decade,” Lenihan said at a press conference in Dublin yesterday.

The yield spread between Irish and German 10-year bonds advanced to a record of 449 basis points on Sept. 28, and narrowed yesterday to 429 points. The increase occurred after Standard & Poor’s cut Ireland’s credit rating one step to AA- on Aug. 24, citing the costs of the bank bailout.

Lenihan is also planning more cuts to avoid becoming the first government after Greece to tap the 750 billion-euro rescue pool set up by the European Union and International Monetary Fund. The Irish budget deficit will reach about 32 percent of gross domestic product this year, more than 10 times the limit for euro members and compared with a government projection of 11.6 percent in December. It was 14.3 percent in 2009.

“In poker parlance, Ireland has put all its chips on the table in an attempt to eliminate any further speculation on the Irish banks,” Michael Cummins, an analyst at Dublin-based Glas Securities, said in a note to clients. “The focus now shifts onto future austerity measures.”

With the largest deficit among the 16 countries in the euro region, Ireland in early 2009 raised income tax and cut pay for state workers by an average 13 percent.

Further cuts will face more resistance from voters and taxpayers. The bailout might cost 1.5 billion euros in interest a year, Lenihan said. That’s equivalent to 375 euros for each of Ireland’s roughly 4 million citizens and the overall bank rescue bill might total as much as a third of the Irish economy.

“The political costs may be bigger than the financial cost,” Philip Lane, an economics professor at Trinity College Dublin, said in an interview with Bloomberg Television. “When you are telling the health sector there are going to be various kinds of cutbacks, it is something that is going to hammer every government for the next 10 years.”

Ireland has injected about 33 billion euros into banks and building societies so far.

Anglo Irish may need up to an additional 6.4 billion euros of capital, rising by another 5 billion euros in the event of unexpected losses, the government said yesterday. Irish Nationwide Building Society may need another 2.7 billion euros.

“Irish people now face the worst budget in Irish history,” said Michael Noonan, finance spokesman for the biggest opposition party, Fine Gael. “This pain will be inflicted on them because Brian Lenihan and his government made a catastrophic bad call on Anglo Irish Bank.”

Lawmakers backing the government have already signaled they won’t support planned cuts. Independent lawmaker Noel Grealish withdrew his support last week for the government because of planned health cuts in the west of Ireland, where his constituency is located.

Prime Minister Brian Cowen’s Fianna Fail-led coalition has 77 seats in parliament and can count on the support of six other lawmakers in the house without Grealish’s vote. The government needs 82 votes to maintain a majority in parliament.

“The Celtic tiger wasn’t for everybody, it was for the wealthy,” said Jonathan Hanna, 29, a community worker demonstrating outside Dublin’s parliament. “I know we have to make cuts, but the poor have already given their cuts.”