It is correct that the euro, the dollar and the pound will not survive and that a new world currency will be proposed as the only solution to all problems.

Deficit spending (Keynesianism) is an invention of elite criminals that want to loot and bankrupt the people:

Joseph Stiglitz, one of the world’s leading economists, has warned that the future of the euro is “looking bleak” and the fragile European economic recovery could be irreparably damaged by a “wave of austerity” sweeping the continent. 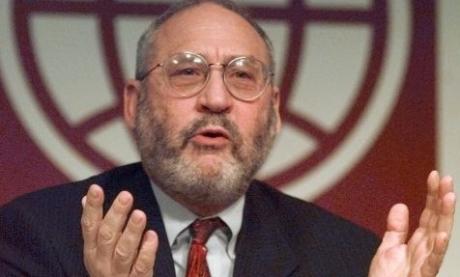 The former chief economist of the World Bank and a Nobel prize winner also predicted that short-term speculators in the market could soon start putting pressure on Spain, which is struggling with a large deficit and high unemployment. Last week, Moody’s cut the country’s credit rating from AAA to Aa1.

The former adviser to President Bill Clinton also says that the banking sector has gone back to “business as usual” too quickly and that there are still risks of another financial crisis despite some improvements in regulation.

Mr Stiglitz, now a professor at Columbia Business School, makes the arguments in an updated edition of his book, Freefall, on the credit crunch. In the new material, exclusively extracted in today’s Sunday Telegraph, he reveals fears that governments around the world will attempt to cut their deficits too quickly and risk a double dip recession.

Tomorrow, George Osborne will outline the Government’s latest plans for multi-billion pound public sector cuts to tackle the historically-high UK deficit. He has faced criticism that the Coalition is in danger of cutting too hard and too fast but the Chancellor has said that without a credible programme for getting the UK economy into balance, interest rates will rise and growth will be choked off.

“The worry is that there is a wave of austerity building throughout Europe and even hitting America’s shores,” Mr Stiglitz said. “As so many countries cut back on spending prematurely, global aggregate demand will be lowered and growth will slow – even perhaps leading to a double-dip recession.

“America may have caused the global recession but Europe is now responding in kind.”

Mr Stiglitz warned that Spain, similarly to Greece, was now in the speculators’ sights.

“Under the rules of the game, Spain must now cut its spending, which will almost surely increase its unemployment rate still further,” he said. “As its economy slows, the improvement in its fiscal position may be minimal.Spain may be entering the kind of death spiral that afflicted Argentina just a decade ago. It was only when Argentina broke its currency peg with the dollar that it started to grow and its deficit came down.

“At present, Spain has not been attacked by speculators, but it may be only a matter of time.”

Turning to the euro, Mr Stiglitz said that the different needs of countries with high trade surpluses, particularly Germany, and those running deficits such as Ireland, Portugal and Greece, meant that the single currency was under intense pressure and may not survive. He suggests that one way to save the euro would be for Germany to leave the eurozone, so allowing the currency to devalue and help struggling countries with exports.

“Countries that share a currency have a fixed exchange rate with each other and thereby give up an important tool of adjustment,” he said. “So long as there were no shocks, the euro would do fine. The test would come when one or more of the countries faced a downturn.”