In a medical first, the device made electricity from inside a living animal. 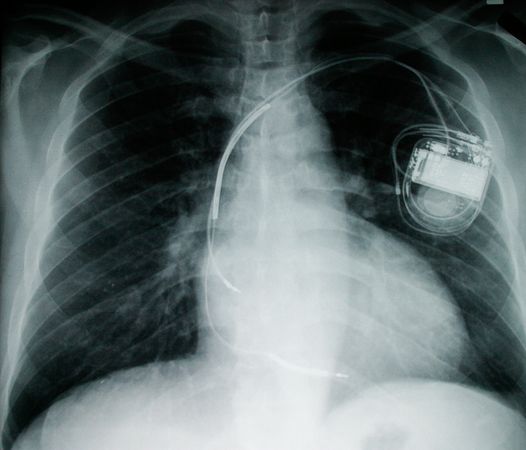 An x-ray picture of a human shows an implanted pacemaker (file photo).

A new fuel cell is putting a twist on alternative energy from biofuels: The implanted device draws power from chemicals in living animals.

Dubbed a glucose biofuel cell, the implant gets its juice from glucose-aka blood sugar-and oxygen, both of which are naturally present in the fluids between a body’s cells.

In a recent study, researchers created a test version of their glucose biofuel cell and implanted it in a white lab rat named Ricky. The rat sported the device successfully for 11 days and suffered no ill effects.

Wires running from the fuel cell out of the rat’s neck showed that the device was producing a significant amount of energy.

The team hopes that their biofuel cell could one day provide safe, longer-lasting power to the next generation of medical implants, such as smaller pacemakers and artificial organs.

“In the future we are expecting to develop, for instance, implantable biosensors able to monitor the level of glucose to control the insulin pump,” an implant used to treat diabetes, said study co-author Serge Cosnier of the Université Joseph Fourier in Grenoble, France.

“The injection of insulin will be more efficient if the glucose level is detected continuously.”

Previous versions of glucose biofuel cells worked only in specific lab conditions and not inside living bodies. That’s because the chemicals used required acidic conditions not typical of body fluids, as well as higher than normal glucose levels.

The entire device is wrapped in a dialysis bag that lets in glucose and oxygen from body fluids. The enzymes react with the glucose and oxygen to create a current that flows along the platinum wire and out of the fuel cell via wires encased in tubing.

With the enzymes protected by graphite and the dialysis bag controlling chemical flow, the new glucose biofuel cell is the first to work from inside the abdomen of a living rat, the study team showed. (Explore an interactive human body.)

The device didn’t cause inflammation and, when it was removed, the researchers found that the rat’s body had coated the device with tissue containing newly grown blood vessels-proof that the animal’s body had accepted the fuel cell and would facilitate the movement of glucose and oxygen into the device.

The trial biofuel cell described in the study produced about two microwatts of power for several hours at a time, with a peak energy density-the amount of energy stored in a given volume-of 24.4 microwatts per milliliter.

A standard pacemaker battery requires sustained power of ten microwatts, but those batteries have significantly smaller energy densities. This means a larger version of the new biofuel cell could easily run a pacemaker but still be smaller than batteries now in use, according to the study.

For instance, Cosnier said, the device could power future biosensors, like the ones proposed for insulin pumps, that would aid sufferers of Parkinson’s and Alzheimer’s disease by monitoring and controlling brain chemicals such as dopamine, adrenaline, and glutamate.

The team is also considering using their biofuel cell in an artificial urinary sphincter, a device used by patients who’ve had their prostates surgically removed and are suffering from incontinence.

Currently, the artificial sphincter has to be operated manually with a pump.

Artificial organs such as kidneys and hearts could also be developed or greatly improved with a renewable, in-body fuel source at hand, he said-provided the side effects are minimal.

One possible risk, Cosnier said, is that the device could malfunction and consume too much of the body’s glucose, leading to hypoglycemia, or low blood sugar.

The rat-implanted biofuel-cell research was published online in May in the open-access journal PLoS ONE.