And now we will see some high level insiders, that know how the financial crisis has been ‘created’ or at least a small part of it, disappear.

Then we will see more civil liberties disappear and the police state and the New World Order advance.

With smiles on the faces of happy elite criminals. 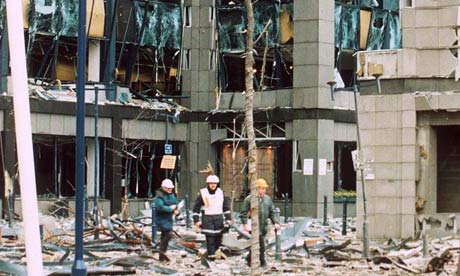 The IRA bombed targets in the City during the 1990s. Now the Real IRA may use the same tactic. Photograph: Rex Features

Banks and bankers are now potential targets for the Real IRA, leaders of the dissident republican terror group have warned in an exclusive interview with the Guardian. Despite having only 100 activists they also said that targets in England remained a high priority.

In an attempt to tap into the intense hostility towards the banks on both sides of the Irish border they branded bankers as “criminals” and said: “We have a track record of attacking high-profile economic targets and financial institutions such as the City of London. The role of bankers and the institutions they serve in financing Britain’s colonial and capitalist system has not gone unnoticed.

“Let’s not forget that the bankers are the next-door neighbours of the politicians. Most people can see the picture: the bankers grease the politicians’ palms, the politicians bail out the bankers with public funds, the bankers pay themselves fat bonuses and loan the money back to the public with interest. It’s essentially a crime spree that benefits a social elite at the expense of many millions of victims.”

But security sources in Northern Ireland point out say the Real IRA lacks the logistical resources of the Provisional IRA to prosecute a bombing campaign similar to the ones that devastated the City of London in the early 1990s or the Canary Wharf bomb in 1996. Although the Real IRA has access to explosives it has yet to carry out large-scale bombings.

The terror group stressed in a series of written answers to the Guardian’s questions that future attacks would alternate between the “military, political and economic targets”. It is the first time the Real IRA has engaged in such open anti-capitalist rhetoric or focused on the role of the banking system.

The leaders also threatened to intensify the group’s terror campaign on all fronts.

“Realistically, it is important to acknowledge that we have regrouped and reorganised and emerged from a turbulent period in republican history.

“We have already shown our capacity to launch attacks on the British military, judicial, and policing infrastructure. As we rebuild, we are confident that we will increase the volume and effectiveness of attacks,” the organisation said.

One element in the Real IRA’s recent activity has been a wave of so-called “punishment” shootings and beatings of those they deem “antisocial elements” in nationalist working class areas. In Derry alone the Real IRA and other aligned groups have shot around two dozen men over the last 18 months.

The Real IRA’s leadership was unapologetic over what its critics have described as “rough justice”. The group believes such attacks are popular and can garner support in areas where the communities were previously alienated from the police.

“These actions are taken as a last resort to protect the community. We are an integral part of the community and the people in them are our eyes and ears. The fact is that the British police force is rejected by republican communities and people naturally turn to us for help.

“The vast majority of issues are resolved by negotiation, a small percentage require more direct forms of intervention including punishment shootings and expulsions,” they said.

On the political front they dismissed Sinn Féin’s claims that its electoral strategy would ultimately yield a united Ireland despite the majority of nationalists in Northern Ireland still voting for Sinn Féin and an overwhelming majority backing the peace process.

The Real IRA insisted, however, that support for them was building and they had turned away hundreds of young disaffected nationalists because they didn’t have the capacity to absorb so many members.

“From the point of view of republican communities, there is still a heavily armed British police force that casually uses plastic baton rounds, CS gas and Tasers, carry out house raids, stop and search operations and general harassment.

“There’s still a 5,000-strong British army garrison, a new MI5 HQ in Belfast, and a British secretary of state. Republican communities are still subjected to sectarian parades and the right to protest is being met with intimidation and violence.”

On the subject of recent reports of talks between dissident republicans and the Dublin and London governments the Real IRA said: “There are no talks with either the British government or the Free State Administration.

“The IRA is not unwilling to talk, in fact there needs to be talks … however, talks need to deal with the root cause of the conflict, namely the illegal British occupation of Ireland. We are mindful, though, that the history of such approaches from the British has been characterised by a lack of integrity, a lack of willingness to address the causes of conflict, and has been motivated by a self-serving agenda.” Northern Ireland’s deputy first minister and Sinn Féin MP, Martin McGuinness, also came in for strong criticism. The former chief-of-staff of the IRA and key Sinn Féin negotiator recently claimed that he had knowledge that dissidents were holding secret discussions with the two governments.

“Martin McGuinness is a British Crown minister who has a vested interest in causing mischief among republicans. His job is to administer the Queen of England’s writ in Ireland … However, if he has any evidence to back up his claims, he should make it public,” the Real IRA said.