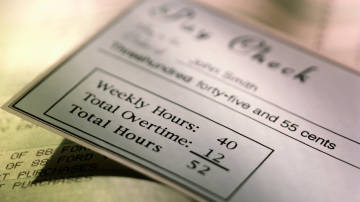 59% of Canadians would be in trouble if their pay was delayed by a week: poll

The recession may be officially over, but six in 10 Canadians are still surviving from paycheque to paycheque, a national survey showed Monday.

Fifty-nine per cent of Canadian workers say they would be in financial trouble if their paycheque was delayed by just a week – the same proportion as last year when the economy was still mired in a downturn, according to a poll of 2,766 people by the Canadian Payroll Association.

The survey comes as the OECD today warned that record high debt levels have left many Canadians vulnerable “to any future adverse shocks.” Also Monday, a Statistics Canada report showed household net worth fell 0.6 per cent in the second quarter, largely due to falling stock markets. Liabilities of households increased, meantime, led by mortgages and consumer credit.

Canada remains a debt nation, owing partly to a flurry of home-buying in this year. Eight in 10 Canadians in the poll say their first or second priority if they were to win a $1-million lottery would be to pay off their debt – an 11-per-cent increase from last year, “indicating that more Canadians are concerned about their debt load than they were a year ago,” the survey said.

Younger workers are having the greatest trouble meeting their current expenses, with two thirds of those aged 18-34 saying it would be very difficult, difficult or somewhat difficult for them to meet their current financial obligations if they missed even one paycheque.

Among households, the situation is most precarious for single parents, with three quarters saying they would have some trouble making ends meet if their pay were delayed.

Top economic concerns among Canadian workers are rising interest rates, not being able to save enough to retire comfortably, inflation and falling back into recession.

* Almost two thirds, or 62 per cent, of respondents expect a salary increase but the vast majority, or 83 per cent, also expect their cost of living to rise in the next year.

* Confidence about economic growth is actually fading. Six in 10 feel the economy in their city or town will improve in the next year, down from 67 per cent in 2009. Workers in Ontario, Quebec and the Atlantic provinces are less confident about their local economies.

This is the second annual survey the payrolls association has conducted.

The survey was taken between late June and mid-July of this year.