Cloned meat: Britain and Europe set for another clash

Europe is allowing meat from cloned animals to enter the food chain “through an open door”, according to MEPs. 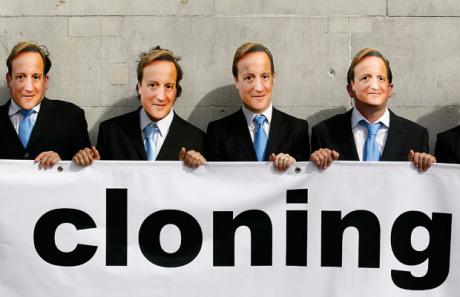 They have called for an immediate measures to stop the importing of meat from America, South America or Japan without some safeguards or a new labelling regime put in place.

Their comments came after the European Commission reconfirmed this week that it believed meat, milk, cheese or any other product from the offspring of a cloned animal was perfectly legitimate and needed no special licence to be sold.This position puts Europe at direct loggerheads with the Food Standards Agency, whose board is meeting next week to discuss cloned animals.

The FSA has always stated that any products from the offspring of a cloned animal, even three generations down the line, had to have a licence before they can be sold.

The row between Europe and the FSA has been simmering after the FSA discovered last month that meat from the offspring of a cloned cow had been unwittingly sold in butcher’s shops in Britain, without a licence being obtained.

The discovery that such meat, for the first time had been eaten by consumers, triggered an often ill-tempered debate into the ethics of cloning animals.

However, John Dalli, Member of the European Commission, responsible for health and consumer policy, late on Wednesday, said: “The Commission’s position is food from cloned animals should not be put on the market without the authorisation as they are considered novel foods.

“The situation is, however, rather different for the offspring of cloned animals. Such animals cannot be distinguished from those of conventional lineage. This aspect has to be taken into consideration when discussing any proposal the commission proposes.”

Linda McAvan, a Labour MEP, said cloned meat and milk should be banned until a new law is in place regulating production.

“It is not just a question about food safety, it’s about what kind of farming and food we want. We know that animal welfare is affected by cloning – there is no scientific doubt on this.

” We need to have a full public debate about cloning and that is why we need a moratorium now on cloned food products until that debate has happened and legislation is in place.”

Struan Stevenson, the Conservative MEP, said he was upset by Mr Dalli’s statement. “I find it extraordinary and rather disturbing he has literally thrown open the door to any products from cloned animals.

“Americans have no traceability. There is no way of knowing if we are importing meat from cloned animals.”

He called for Europe to have the right to put a label on any meat or dairy products coming from America, South America or Japan stating that they could have come from a cloned animal, or the offspring of a cloned animal.

The FSA board is meeting next week. One of its proposals is the board recommends to the Government that: “Future controls on food produced from non-traditionally bred animals should in principle include the original animal and subsequent generations until such time as there is sufficient science and evidence to provide assurance of food safety.”