China is poised to sign a $2bn (£1.3bn) deal to build a railway line in Iran in the first step of a wider plan to tie the Middle East and Central Asia to Beijing. 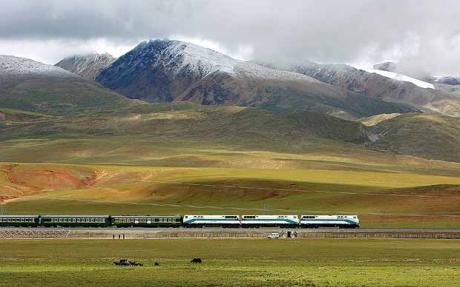 The Chinese have already built a railway line serving Tibet, above, and now plan a modern variant on the old ‘Silk Road’ through Central Asia Photo: AP

China’s railways minister, Liu Zhijun, is expected to visit Tehran this week to seal the deal, according to his Iranian counterpart, Hamid Behbahani.

“The final document of the contract has already been signed with a Chinese company and the Chinese minister will visit Iran on September 12 to ink the agreement,” said Mr Behbahani.

The new line will run from Tehran to the town of Khosravi on the border with Iraq, around 360 miles as the crow flies, passing through Arak, Hamedan and Kermanshah.

Eventually, the Iranian government said, the route could link Iran with Iraq and even Syria as part of a Middle-Eastern corridor. That could also benefit the 5,000 Iranians who make pilgrimages each day to the holy cities of Najaf and Karbala in Iraq.

Nicklas Swanstrom, the executive director of the Central Asia-Caucasus Institute at Johns Hopkins University, said the contract to build the line was the first step for China to build an entire rail infrastructure for central Asia.

“It makes sense that if you build railways in Iran, you then get deals to stretch the lines into central Asia,” he said, referring to a “very concrete plan” to run a railway from Iran through the landlocked countries of Tajikistan, Kyrgyzstan, and eventually to Kashgar in China, in a modern “silk route”.

That line would give the central Asian states vital access to Iran’s port of Chahbahar on the shores of the Persian Gulf, and could also eventually give China a vital overland freight route to Europe.

“For China, it could cut the cost of transporting goods to Europe by 5pc or 6pc,” said Professor Swanstrom.

“It also makes political sense, because while technically the US, Europe or Russia could block China’s sea routes, it would also have a land route. And by tying your neighbour’s infrastructure to you, it brings them closer,” he added. “It decreases Russia’s influence in the region, and definitely decreases the influence of the US and Europe.”

Mahmoud Ahmadinejad, the Iranian president, raised the idea of the new railway earlier this year at a summit in Tehran.

Transport ministers from Tajikistan, Afghanistan and Iran are expected to gather in Dushanbe, the Tajik capital formerly known as Stalinabad, next month to firm up a deal for a 1,225-mile route. The Asian Development Bank is funding a feasibility study for the project.

Iran is determined to forge tighter links with its neighbours, and rebuild itself as a trade hub, in order to build a regional alliance that would support it against Nato countries.

At the beginning of last month, Mr Ahmadinejad said Tajikistan, Afghanistan and Iran should join forces to become “an obstacle” to Western influence in the region.

Iran has pointedly not signed up to European Union plans for a trade corridor through Europe, the Caucasus and Asia, and has instead busied itself with bilateral agreements with its neighbours. Reza Rahimi, the Iranian vice-president, has promised to cut freight times between Europe and China from two months by sea to 11 days by land.

In addition, the current sanctions on Iran allow China, which relies on the Persian state for 15pc of its energy needs, to drive a hard bargain on the construction contract for the line.

China is rapidly expanding its own high-speed rail network and has unveiled plans for lines that will connect Beijing with London, both through Russia and through central Asia.