Modern (energy/frequency) weapons leave no traces, so finding no other injuries means nothing. 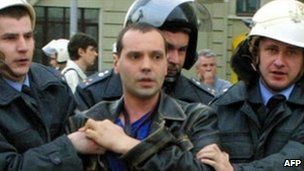 Oleg Bebenin was an active member of the Belarussian opposition

Officials in Belarus say a prominent opposition figure found hanged at his weekend home outside the capital, Minsk, on Friday committed suicide.

Forensic examiners established that, apart from the noose mark on Oleg Bebenin’s neck, there were no other injuries, a local prosecutor said.

Colleagues said they could not believe the father-of-two had killed himself.

They pointed out that he had left no note and Charter 97’s editor, Natalia Radina, said he had not been having any family or health problems.

He had, she told independent Moscow radio station Ekho Moskvy, been absorbed in his work and campaigning for opposition presidential hopeful Andrei Sannikov.

Most independent media in Belarus have closed down and the authorities barely tolerate political dissent, correspondents say.