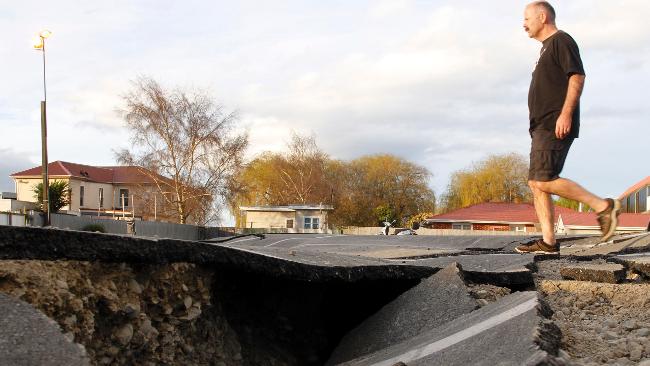 A man walks over a damaged road in Paiapoi, 20 kilometres south of Christchurch following the weekend’s devastating earthquake / AP 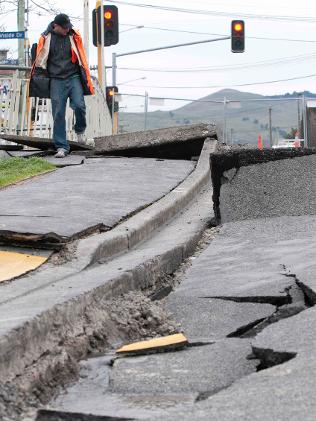 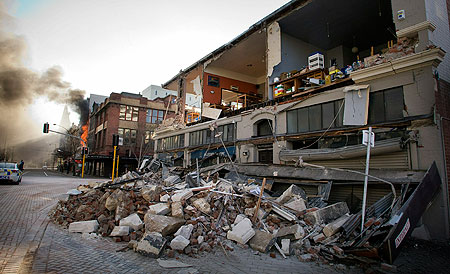 At least 500 buildings were destroyed in the 7.1-magnitude quake that struck New Zealand at 4.35am on Saturday near the South Island city of about 400,000 people.

The earthquake cut power across the region, roads were blocked by debris, and gas and water supplies were disrupted.

Christchurch Mayor Bob Parker yesterday said power had been restored to 90 per cent of the city and water supply had resumed for all but 15 to 20 per cent of residents.

Portable toilets and tanks of fresh water had been placed around the city.

As the clean-up continued yesterday, the exodus began, with dozens of Australian tourists fleeing, thankful the quake had hit early in the morning rather than during the day.

Melbourne resident Donna Van Niekerk, who was in Christchurch with husband Lionel and daughter Darcy, said the quake was like “being on a boat in 20-foot waves”.

“It was massive, the building was swaying slowly,” she said. “I just got thrown to the other side of the room. We were just waiting for the building to collapse.”

Kevin Tracey and wife Susan, from Ipswich, were sleeping in a hotel 50m from some of the worst damage.

It was the first night of Mr Tracey’s first overseas holiday.

“It just shook,” he said. “It rattled the front door, I thought somebody was trying to get in.”

Teams of building inspectors searched Christchurch’s CBD for structural damage, while New Zealand’s Government postponed school until Wednesday and most surgery was cancelled in the city’s hospitals.

Canterbury University geology professor Mark Quigley said “a new fault” had ripped across the globe and pushed surface areas up.

He said the quake was caused by the collision of the Pacific and Australian tectonic plates.

“The long linear fracture on the Earth’s surface does things like break apart houses, break apart roads. We went and saw two houses that were completely snapped in half.”

The epicentre was about 40km northwest of Christchurch, where stunned locals gathered yesterday to view the damage. A previously straight road had shifted about 3m in one place, while cracks large enough to swallow a person had opened in the ground. Officials have refused to rule out deaths.

Trish Langfield, of Cowra in NSW, was on the 21st floor of her hotel when the earthquake hit. She estimates the building swayed a metre either side.

“It swayed left to right. Extremely,” she said.

Jenny Porter, of Sydney, was one of the tourists at Christchurch Airport yesterday, having feared for her life. “It was quite phenomenal,” she said. “[We] just didn’t know if the house was going to collapse.”

New Zealand sits above an area of the Earth’s crust where two tectonic plates collide. The country records more than 14,000 earthquakes a year, but only about 150 are powerful enough to be felt above land.

New Zealand’s last major earthquake registered 7.8 on the Richter scale and hit the South Island’s Fiordland region on July 16, 2009, moving the southern tip of the country 30cm closer to Australia.

By John Ferguson and Rob Griffith
From: The Daily Telegraph
September 06, 2010 1:58AM

Sept. 04 (Bloomberg) — New Zealand’s second-largest city, Christchurch, was placed under night curfew as a storm threatens to exacerbate an estimated NZ$2 billion ($1.44 billion) of damage caused when a magnitude 7.0 earthquake hit the area.

A state of emergency was declared after the quake struck at 4:35 a.m. local time yesterday, cutting power, damaging roads, rupturing sewer lines and water pipes and ripping facades off buildings. Christchurch, suffering aftershocks, is now bracing for possible flooding as gale force winds and heavy rains are expected to reach the city today, the government said.

“It’s a miracle no one lost their life,” New Zealand Prime Minister John Key said as he inspected the damage yesterday. One person received serious injuries when the temblors struck.

The quake comes as New Zealand, whose snowcapped peaks and verdant valleys formed the backdrop to the Academy Award-winning “Lord of the Rings” trilogy, struggles to rebound from its worst recession in 30 years. The country, the biggest global exporter of dairy products and lamb, is affected by about 15,000 earthquakes each year, according to GeoNet, an earthquake- monitoring site.

“It’s unbelievable, it’s like a warzone,” Christchurch resident Tracey Chambers said in a phone interview yesterday. “We’ve got so many big, brick historic buildings here and a lot have caved in, including the restaurants and bars. If the earthquake had happened a few hours earlier, hundreds would have been killed.”

The quake struck about 55 kilometers (34 miles) west- northwest of the city and at a depth of 12 kilometers.

Christchurch City Council declared a state of local emergency and said it is assessing damage to buildings in case evacuations are needed. The hospital is operating on generator power, the council said in a statement. Christchurch International Airport was closed yesterday until 1:30 p.m. local time.

“There would not be a house in the city that has escaped damage in some way,” Christchurch Mayor Bob Parker said at a televised news conference yesterday. “We have been extremely lucky as a nation there have been no fatalities,” Civil Defense Minister John Carter said.

The quake was probably the worst to hit New Zealand for 80 years because it was a “bull’s-eye on a major city,” Warwick Smith, from the Institute of Geological Nuclear Sciences, told TVNZ today. Christchurch is home to about 348,000 people, according to Statistics New Zealand.

Damage at Lyttelton Port Co., which handles coal exports about 12 kilometers southeast of Christchurch, will cost “millions” of dollars to repair, Chief Executive Peter Davie said in a phone interview. The damage, mainly to paving and flat surfaces, will take months to fix, he said.

“Things have actually stood up pretty well from Telecom’s point of view,” company spokesman Ian Bonnar said in a phone interview from Auckland yesterday. “The landline services are pretty much intact.”

Power was restored to about 77 percent of Christchurch by 12 p.m. yesterday, the government said. About 10 percent of the city was expected to be without power overnight, it said.

New Zealand’s most powerful recorded earthquake occurred in January 1855 with an estimated magnitude of 8.2, according to GeoNet. It shifted vertically about 5,000 square kilometers of land.

Several aftershocks followed yesterday’s quake, including one of magnitude 5.7 at 4:53 a.m., the U.S. Geological Survey said on its website. The strength of the first quake was revised to 7.2 and later to 7.0 from an initial report of 7.4 by the USGS.

Damage was reported on the southern part of North Island, home to New Zealand’s capital, Wellington, and Auckland, its largest city.

The last quake to cause casualties in the nation hit in December 2007, when buildings in downtown Gisborne collapsed. Eleven people were injured and one died of a heart attack, GeoNet said.

New Zealand is starting to benefit from a rebounding global economy and is poised to grow 3 percent this year, compared with a 1.6 percent contraction in 2009, according to the International Monetary Fund.