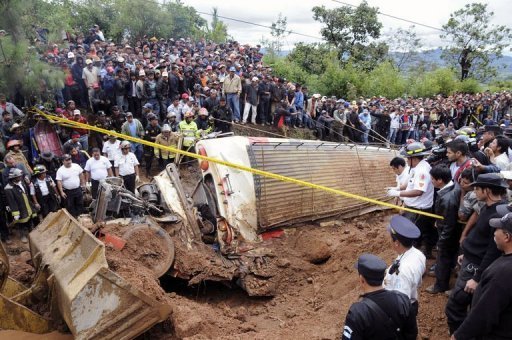 GUATEMALA CITY — At least 20 people were killed in Guatemala in landslides triggered by weeks of driving rains, according to figures released by national emergency and rescue services.

President Alvaro Colom has declared a national emergency in the wake of the disaster.

“Top priority at present is dealing with this emergency. There are no funds left to deal with earlier disasters like the one caused by tropical storm Agatha,” in late May, Colom told reporters after a surveying tour of the country Saturday

He said damage estimates across Guatemala after weeks of rain stood at 350-500 million dollars, or 40 percent of the damage wrought by Agatha, which killed 183 people in Central America, including 165 in Guatemala earlier this year, and left thousands homeless.

The latest rains have triggered several dozen landslides around the country.

One swept away a bus on a road near central Chimaltenango city killing at least 10 people and injuring 20.

The other killed four people inside a house in western Quetzaltenango.

Two more perished when a mudslide swept of the Inter-American Highway two trucks and several lighter vehicles, sending them into a ravine.

Another four people have been killed in other incidents around the country.

The incident on the highway prompted authorities to close the road.

“This section of the road has been declared impassable,” Guatemalan Communications, Infrastructure and Housing Minister Guillermo Castillo told reporters. “It will not reopen until we are sure a similar tragedy would not occur again.

Castillo explained that the ground was saturated with rainwater and there was a high risk of fresh mudslides.

Guatemala’s meteorologists have forecast another 24-36 hours of heavy rain throughout most of the country.

The threat of new mudslides has prompted emergency workers to evacuate about 4,000 people from their homes in various parts of the nation, authorities said.