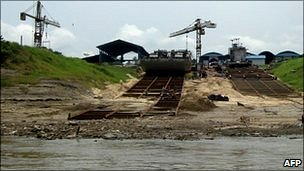 Amazon shipyards have been left high and dry

The Amazon river has dropped to its lowest level in 40 years in north-eastern Peru, causing severe economic disruption in a region where it is the main transport route.

At least six large boats have been stranded near the port city of Iquitos.

The low water level is the result of a prolonged spell of dry weather, Peru’s national meteorological office said.

The river is expected to fall further before the rainy season begins next month.

Iquitos and other towns in Peru’s rainforest region have no road links to the rest of the country, and depend on the Amazon and its tributaries for transport.

Food and other supplies are now being brought in by smaller boats that can navigate the shallow channels, weaving between exposed mud banks.

But these journeys take up to twice as long, and the cost is much higher.

Iquitos, the biggest city in the Peruvian Amazon, is more than 3000km (1864 miles) from the mouth of the river in Brazil.

The Amazon is the world’s second-longest river, after the Nile, but discharges far more water from its mouth and drains more territory.