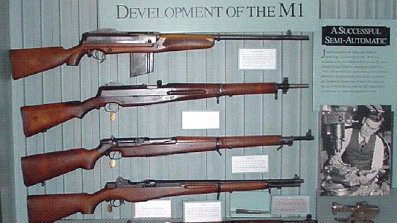 The South Korean government, in an effort to raise money for its military, wants to sell nearly a million antique M1 rifles that were used by U.S. soldiers in the Korean War to gun collectors in America.

The Obama administration approved the sale of the American-made rifles last year. But it reversed course and banned the sale in March – a decision that went largely unnoticed at the time but that is now sparking opposition from gun rights advocates.

A State Department spokesman said the administration’s decision was based on concerns that the guns could fall into the wrong hands.

“The transfer of such a large number of weapons — 87,310 M1 Garands and 770,160 M1 Carbines — could potentially be exploited by individuals seeking firearms for illicit purposes,” the spokesman told FoxNews.com.

“We are working closely with our Korean allies and the U.S. Army in exploring alternative options to dispose of these firearms.”

“Guns that can take high-capacity magazines are a threat to public safety,” said Dennis Henigan of the Brady Campaign to Prevent Gun Violence. “Even though they are old, these guns could deliver a great amount of firepower. So I think the Obama administration’s concerns are well-taken.”

But gun rights advocates point out that possessing M1 rifles is legal in the United States — M1s are semi-automatics, not machine guns, meaning the trigger has to be pulled every time a shot is fired — and anyone who would buy a gun from South Korea would have to go through the standard background check.

“Any guns that retail in the United States, of course, including these, can only be sold to someone who passes the National Instant Check System,” said David Kopel, research director at the conservative Independence Institute. “There is no greater risk from these particular guns than there is from any other guns sold in the United States.”

M1 carbines can hold high-capacity ammunition clips that allow dozens of rounds to be fired before re-loading, but Chris Cox, chief lobbyist for the National Rifle Association, noted that is true about any gun in which an ammunition magazine can be inserted — including most semi-automatics.

“Anything that accepts an external magazine could accept a larger capacity magazine,” Cox said.

“But the average number of rounds fired in the commission of a crime is somewhere between 1 and 2 … this issue just shows how little the administration understands about guns.”

According to the ATF Guidebook on Firearms Importation, it would normally be legal to import the M1s because they are more than 50 years old, meaning they qualify as “curios or relics.” But because the guns were given to South Korea by the U.S. government, they fall under a special category that requires permission from the State Department before any sale.

Kopel said that he hopes the State Department spokesman’s statement that it is working to “dispose” of the guns does not mean they want to melt them down.

“It seems to have this implication of destruction, which would be tremendously wasteful,” he said. “These are guns that should be in the hands of American citizens for marksmanship and safety training.”

Asked whether melting the guns down would be a good option, Henigan said: “Why let them into the country in the first place? If there is a legally sufficient way to keep them out, we think it’s perfectly reasonable to do so.”

Past administrations have also grappled with the issue of large-scale gun imports.

The Clinton administration blocked sales of M1s and other antiquated military weapons from the Philippines, Turkey and Pakistan. It also ended the practice of reselling used guns owned by federal agencies, ordering that they be melted down instead.

In contrast, 200,000 M1 rifles from South Korea were allowed to be sold in the U.S. under the Reagan administration in 1987.

A decision like that would be better for everyone, Cox said.

“M1s are used for target practice. For history buffs, they’re highly collectible. We’re going to continue to make sure that this backdoor effort that infringes not only on lawful commerce but on the Second Amendment is rectified.”

“They clearly were used as military guns, and the fact that they likely can take high-capacity magazines makes them a special safety concern,” he said.