‘Hakani’ is a film produced by the American fundamentalist missionary organisation Youth With a Mission.

It claims to be the “true story” of a Brazilian Indian child called Hakani who was supposedly buried alive by her tribe, the Suruwaha.

In fact, the film was faked – and even the missionaries who produced it ‘admit there is no way to verify what they say happened’. 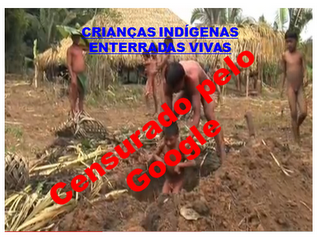 We get sick when we remember that Nazis murdered handicapped people, but nothing has really changed. The communists, who have been pushing for free abortions in Brazil,  are now supporting the “right” of Brazilian indians to BURY ALIVE  handicapped or unwanted children, even when the mothers want to take care of them. The reason is that this is a cultural tradition that can’t be violated.

The organization which made a video about this horror has been accused of cultural crime ! A monster named Mercio Gomes, former chief of the Indian Authority in Brazil and an America hating marxist, is behind this nonsense.

Recently, Google CENSORED the video, that was part of a campaign to help the children.

There is still one copy of the video that was uploaded recently (caution: strong images):

The site for the campaign (in English):

Christian blogger Julio Severo, who is living on hiding with his family, persecuted because of his denouncing of the crimes of the Left, posted the article below that is copied below.

Please help us spreading this terrible situation and push for the approval of the law that is pending on Congress. Awareness is everything.

“When my nephew was buried alive three years, I suffered a lot. Wished to die with him. .” We suffer a lot when burying a child. ”
– Indian Makana Uru-eu-wau-wau

Hundreds of indigenous children, rejected by their tribes, are buried alive in Brazil every year. This is an ancient practice, still found in more than 20 different indigenous peoples.  Many of these children are newborns.  Others are killed at 3, 5 and 11 years of age.  Hundreds of them are sentenced to death for being physically disabled or mentally ill, or because they are twins or daughters of a single mother. . Many more are poisoned or abandoned in the forest because the Indians, influenced by indigenous traditions involving witchcraft, believe that such children bring bad luck to the tribe.

The plight of these children has been revealed to the world, screaming: “What the Brazilian government is doing to stop the killing of innocent children?”

The government agency responsible for overseeing the welfare of Indians is FUNAI, which for decades knows about this problem well, but prefers to remain comfortably in the posture of omission, with the excuse of not interfering with native customs.

In order to sensitize the  world opinion regarding the insensitivity of the Brazilian government before the sacrifice of innocent blood in the tribes, the film “Hakani” was produced,  which shows the need for action to stop these killings.

Evangelicals are used as scapegoats

However, instead of acknowledging their mistakes, individuals connected with FUNAI now take action, requiring the Lula government move against evangelicals who took the initiative to launch an international campaign with the production of the film “Hakani.

In an article on his blog, Mercio Pereira Gomes, former president of FUNAI, not only defends the state and its interests, but also attacked evangelical organizations like JOCUM, that work among the Indians. . The title of the article is: ” JOCUM makes criminal film about  Zuruahá .

To Mercian, the one who kills or who omits before the murders is not a criminal. The Criminal is the one who is denouncing the killings!

It is very easy to divert the attention of the public using the evangelicals as scapegoats. . State actors, highly paid and very silent, use only the evangelicals as targets of their personal prejudices and state.  A state supposedly based on avoidance of prejudice, preaching that discrimination is a crime, never feel ashamed to practice the evangelical bias for any reason.

“Omission is a crime.”

I could not resist sending a message to the Mercian, saying, “Mercian, I would just like to know one thing: when you were president of FUNAI, what have you done to stop the slaughter of indigenous children?Omission is a crime.The movie is bothering you just because it highlights the sobering fact that if the killings continue, it is because there is omission of FUNAI.  Think about it, former president of FUNAI.

I’m puzzled: today we condemn people who have been silent during the Nazi regime, but we don’t care about the failure of state agents today. In both cases, innocent people were murdered while the Mercians in office did nothing to intervene.

The state and its agents did nothing and do nothing to stop the killings.  Rather, they are willing to attack the evangelicals who are mobilizing.And then the state institutions and NGOs supported by it have the chutzpah to declare that evangelicals are bigots.

Even under the pressures, prejudices and unjust persecutions of the federal government, evangelicals and all the good people can not shut up the murder of indigenous children.  The innocent cry out, and they hear this cry cry together.

Indigenous leader calls along with the innocent

The indigenous leader Eli Ticuna, the Amazon, reports: “As Indians, we know well the pain that these families face when they are forced by tradition to sacrifice their children.  But I also know brave women who face the tradition and literally dig up children who were sentenced to death. These women, even without ever having studied human rights, they know that life is more important than the right to preserve a tradition. ”

Eli Ticuna tells that, even without any help from government’s  agencies and sensitivity, he took action: “Because the suffering of my people, indigenous, and courage of my relatives who are opposed to infanticide, I set to work in drafting a bill.  The first draft came out of my head.In a second phase, counted with the support of a team of specialists and a member of Congress familiar with the subject “.

Eli Ticuna calls everyone to get involved in approving a bill to protect Indian children: “I am indigenous and defender of fundamental rights, I urge the Brazilian society, Indians and non-Indians to participate in the Campaign Act Muwaji . The first thing I ask is that you watch the documentary HAKAN.  It is the true story of a girl who was buried alive Suruwaha, but was rescued by his brother nine years. You will be moved by seeing the fight of this boy to save the life of her sister.  After watching the film, help us to press the government to be voted the Law Muwaji urgently. It has been  exactly one year that the bill is stuck in the Human Rights Commission.  This shows total disregard of Congress towards the indigenous cause. We have less than a month to make the committee vote on the project, otherwise it will fall into oblivion.  We need your help.. Join the campaign and help us overcome this terrible practice that claims the lives of hundreds of innocent children. ”

To ensure indigenous children’s right to life, Rep. Henrique Afonso introduced the bill in Congress #1057, known as the Law Muwaji. O projeto, que foi apresentado em 2007, até hoje não foi levado à votação e aprovação porque a relatora da comissão que o está examinado é petista. The project, which was introduced in 2007,  has not been put to a vote and approval because the rapporteur of the committee that is examined is from the Worker’s Party, Marxist PT. The priority of the PT, as well as you can see, is not and never has been rescuing children from abortion and the killing between tribes.

The project was named Muwaji Law in tribute to the courage of Indian Muwaji Suruwaha.  According to the traditions of her people, she should have sacrificed her daughter Iganani, who was born with cerebral palsy. . But she fought against this custom, facing not only his tribe, but also all the bureaucracy of the Brazilian government to guarantee the life and medical treatment of her daughter.