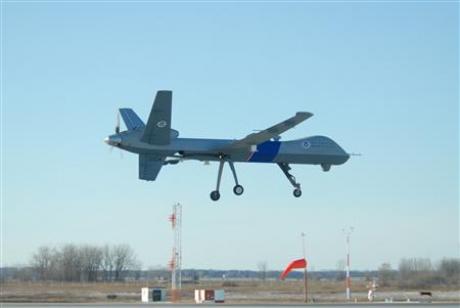 PHOENIX (Reuters) – The U.S. government will have unmanned surveillance aircraft monitoring the whole southwest border with Mexico from September 1, as it ramps up border security in this election year, a top official said on Monday.

Homeland Security Secretary Janet Napolitano said U.S. Customs and Border Protection would begin flying a Predator B drone out of Corpus Christi, Texas, on Wednesday, extending the reach of the agency’s unmanned surveillance aircraft across the length of the nearly 2,000 mile border with Mexico.

“With the deployment of the Predator in Texas, we will now be able to cover the southwest border from the El Centro sector in California all the way to the Gulf of Mexico in Texas, providing critical aerial surveillance assistance to personnel on the ground,” Napolitano said during a conference call.

“This is yet another critical step we have taken in ensuring the safety of the border and is an important tool in our security toolbox,” she added.

Illegal immigration and security along the porous border with Mexico has become a hot topic this year, when the ruling Democrats’ control of Congress is on the line in November 2 elections.

Earlier this month, President Barack Obama signed a $600 million bill that would fund some 1,500 new Border Patrol agents, customs inspectors and other law enforcement officials along the border, as well as paying for two more unmanned drones.

Napolitano said the additional aircraft pledged under the bill, together with the new aircraft soon to begin operations in Texas, would increase the Customs and Border Protection drone fleet to six by the start of next year.

The Predator B drones are made by defense contractor General Atomics. They carry equipment including sophisticated day and night vision cameras that operators use to detect drug and human smugglers, and can stay aloft for up to 30 hours at a time.