After years of drought, flash floods have destroyed harvests in Niger 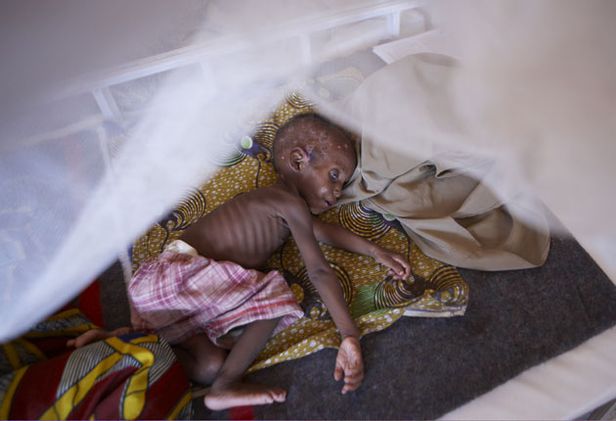 Nineteen-month old Amina at Save the Children’s clinic for severely manlnourished children in Aguie, Niger, yesterday. Two of her siblings have already died within the past year HARRIET LOGAN/SAVE THE CHILDREN

Hundreds of thousands of children across central Africa are at risk of death from starvation and disease after flash flooding worsened an already chronic humanitarian crisis caused by drought.

Aid agencies warned yesterday that 10 million people are already facing severe food shortages, particularly in the landlocked countries of Chad and Niger, after a drought led to the failure of last year’s crops. As many as 400,000 children are at risk of dying from starvation in Niger alone, according to Save the Children.

Now unusually heavy rains have washed away this year’s crops and killed cattle in a region dependent on subsistence agriculture. Organisations including Oxfam and Save the Children say that the slow international response to the emergency means that only 40 per cent of those affected are receiving food aid. As many as four out of five children require treatment for malnutrition in clinics.

Such is the shortage of international aid that the United Nations World Food Programme has had to scale back its £57m operation to feed eight million people in Niger and instead concentrate its efforts on the most vulnerable – children under two – according to Oxfam.

Save the Children says the increased malnutrition rate could swiftly be followed by an increase in the number of children dying from disease because of floods in Niger caused by heavy rain over the past few weeks. “Stagnant pools of water have been contaminated by animal carcasses and are a breeding ground for malaria-carrying mosquitoes. This has increased the threat of malaria, respiratory disease and diarrhoea – the biggest killers of young children,” the organisation said.

“After six months without proper nutrition, these children have little resistance to disease,” said Severine Courtiol, Save the Children’s Niger manager. “There is little children can do to avoid coming into contact with this contaminated, disease-ridden floodwater. That’s why it’s critical we make sure they get enough food so they are strong enough to fight off and recover from sickness.”

Robert Bailey, Oxfam’s west Africa campaigns manager, said that some food was available in marketplaces in Niger, but was too expensive for ordinary households to afford. As a result, many were reduced to eating leaves and berries.

Chad and parts of Mali were also affected, he added. “The international donor response has been too little too late. We estimate that 7.9 million people are affected by food shortages in Niger, with only 40 per cent receiving international aid. The other 60 per cent are dependent on the government and NGOs [non-governmental organisations]. But the government has no food.”

The crisis follows a similar emergency in Niger just five years ago. “The donors shouldn’t now just pack up and go home,” Mr Bailey said. “The food aid does nothing to address the ongoing vulnerability. The region continues to be exposed to this kind of emergency in the future. We are asking donors to stay and help with a transitional programme. These kinds of emergencies are insidious because they are slow burning, which means they don’t have the same impact in the media as the floods in Pakistan or earthquake in Haiti, for example.”

Save the Children added that last week 2,400 severely malnourished children under the age of five visited its clinics. This was up from 609 in the last week of January.

Rachel Palmer, of Save the Children, said: “Niger is one of those forgotten countries. Last year the rains failed so the crops totally failed in many, many places. That was in September and October.

“A lot of people didn’t have anything and those who did only had enough to last a few months. So most people started running out of food in February or March. This year people were hoping that the harvest would be good, but the floods have destroyed a lot of crops and vegetable gardens. Thirty per cent of the population didn’t harvest anything at all and more than half the population ran out of food early in 2010.

“The next harvest isn’t due until the end of September or early October, so families are resorting to desperate measures, and children are bearing the brunt. There has been a 42 per cent increase in acute malnutrition in children since last year.”

Hollow harvest: ‘We manage to eat four times a week, but even when we have food it’s not enough’

“We only harvested about 10 bottes (bundles) of millet, and since that ran out, we’ve had to buy millet. I collect wood to sell so we can buy millet. But we don’t have enough food to feed the family because I don’t have enough money. I’m not happy to see my children without food. We manage to eat four times a week, but even when we do have food it’s not enough.

“It’s the same problem for many families in my village. People are living in a lot of difficulty. There are a lot of sick children in the village – both sick and malnourished. For me, it’s really linked to the bad harvest, because if a child doesn’t have enough food, I’m sure they won’t develop properly. My children don’t have enough to eat.

“There are many children who died because of a lack of food. Parents are having to leave their families to go and look for food, and when they don’t find it, their children die of hunger.” – Assia, 20, and daughter Najaatou, 20 months, Korgom village, Niger.

Niger, roughly five times the size of the UK, is a country of 80 per cent desert in central Africa landlocked between Algeria, Libya, Chad, Nigeria, Burkina Faso, Benin and Mali. It has a population of 15.3 million who live in the 20 per cent of the country that isn’t desert. The vast majority of the population rely on subsistence agriculture and livestock farming.

Niger is one of the poorest countries in the world, subject to repeated droughts with soil erosion and desertification a major concern. It has one of the highest birth rates in the world. One in seven women die in childbirth and one in six children die before their fifth birthdays.