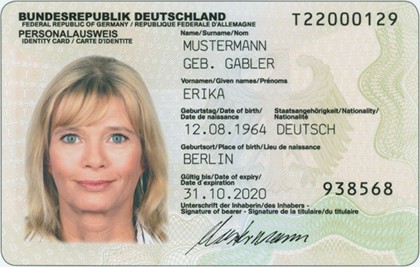 Various German authorities will be able to identify persons fast and reliable by scanning the RFID citizen card. These will be the police, customs and tax authorities and of course the local registration and passport granting authorities.

The production of the RFID chips, an integral element of the new generation of German identity cards, has started after the government gave a 10 year contract to the chipmaker NXP in the Netherlands. Citizens will receive the mandatory new ID cards from the first of November.

The new ID card will contain all personal data on the security chip that can be accessed over a wireless connection.

The new card allows German authorities to identify people with speed and accuracy, the government said. These authorities include the police, customs and tax authorities and of course the local registration and passport granting authorities.

German companies like Infineon and the Dutch NXP, which operates a large scale development and manufacturing base in Hamburg, Germany are global leaders in making RFID security chips. The new electronic ID card, which will gradually replace the old mandatory German ID cards, is one of the largest scale roll-outs of RFID cards with extended official and identification functionality.

The card will also have extended functionality, including the ability to enable citizens to identify themselves in the internet by using the ID card with a reading device at home. After registering an online account bonded to the ID card, are able to do secure online shopping, downloading music and most importantly interact with government authorities online, for example.

Biometric passports in a number of countries are equipped with RFID chips, containing a digital picture and fingerprints, and have been around for nearly 5 years after the United States required such passports for any person entering the country.

There are some concerns that the use of RFID chips will pose a security or privacy risk, however.

The German ID card is using the BAC protocol as well, but only for the basic data which is printed on the front of the card, the picture and the name. Other fields are protected by a stronger proprietary protocol.

Illegal access to the stored data would be useful to create perfectly forged passports and for criminals to use hijacked identities for supposedly secure transactions online.

The responsible German ministry, however, cites the many advantages of employing a RFID chip, such as a longer card lifetime, the option to connect them to other future devices like RFID-reading mobile phones, and saving cost by being compatible with the existing infrastructure for the RFID passports.