Once your fate depends on the elite mafia you are doomed.

The flooding crisis has weakened an economy already struggling to cope with its heavy financial burden. Omar Waraich reports from Islamabad 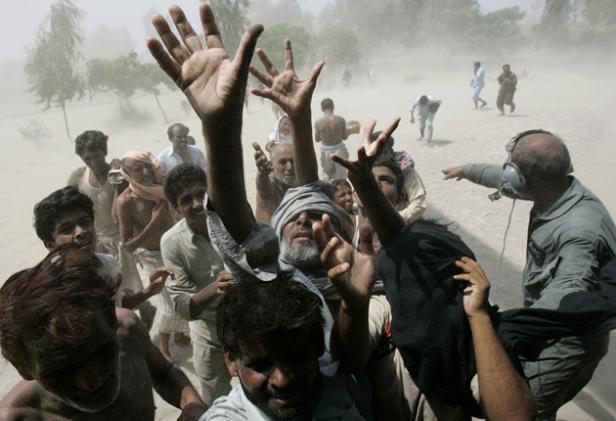 Flood survivors in Punjab province jostling for emergency relief yesterday as about 150,000 people were forced to move to higher ground when the swollen Indus River submerged more villages (AP)

Pakistan’s already creaky economy has been pushed to the verge of ruin by the devastating floods of the past month.

With foreign aid only now beginning to trickle in, the impoverished country has been forced to take out further loans while pleading for outstanding ones to be restructured.

Already burdened by heavy debt, the country’s economy has suffered a major setback. Funds will have to be poured into reconstruction efforts while many sectors of the economy, especially agriculture, will suffer losses for up to several months, if not years. So far, the floods have covered a fifth of the country, cost at least 1,600 lives, displaced 4.6 million people, destroyed roads, bridges and schools, damaged power stations and dams, and swamped millions of acres of agricultural land.

About 150,000 Pakistanis were forced to move to higher ground yesterday as water from a freshly swollen Indus River submerged dozens more towns and villages in the south. Officials expect the floods to recede across the country in the next few days as the last river torrents empty into the Arabian Sea. Survivors may find little left when they return home. Already, 600,000 people are in relief camps set up in Sindh during the past month. The floods have affected about one-fifth of Pakistan’s territory; at least six million people have been made homeless, and 20 million affected overall.

A top-level delegation from Pakistan’s Finance Ministry will travel to Washington this week to ask the International Monetary Fund to ease the restrictions imposed on its $11.3bn (£7.3bn) support package. Before the floods, Pakistan was struggling to meet the fund’s requirements. Meeting those conditions now will be impossible.

Some officials estimate that the cost of rebuilding infrastructure could be $15bn, money that Islamabad simply doesn’t have. As of July, Pakistan had a debt of $55.5bn. That figure will jump to $73bn in 2015-16, as debts that were rescheduled after 9/11, in exchange for Pakistan’s co-operation in the “war on terror”, will come back into play.

The finance delegation’s aim will be to persuade the fund to relax its conditions or draw up a fresh agreement, taking into consideration the toll exacted by the worst natural disaster the country has faced in living memory. As a result of the tragedy, the budget deficit will grow, inflation will rise, and economic growth will slow – all areas where the fund had wanted to see progress in the opposite direction.

At the same time, Islamabad has secured loans of $1bn from the World Bank and $2bn from the Asian Development Bank to help relief efforts and begin the task to rehabilitation and reconstruction. Government officials say that they were left with no option but to approach the banks as foreign aid has generated only a fraction of what’s needed.

At the start of last week’s special session of the UN General Assembly, only half of the Secretary General’s call for $459m had been received in pledges. After impassioned appeals by Ban Ki-moon and the US Secretary of State, Hillary Clinton, that figure rose. New pledges arrived of $60m from Washington, raising its contribution to $150m, $50m from the UK, $32m from Germany and $38.5m from the European Union. By the end of the session, Pakistan’s Foreign Minister, Shah Mahmood Qureshi, said he was confident that the target of $459m “is going to be easily met”. After days of hand-wringing, Islamabad finally accepted New Delhi’s offer of $5m, soothing anxieties on both sides of the border between the arch-rivals.

But Pakistani economists say that the aid from abroad still falls short of the funds required, forcing Islamabad to resort to expensive borrowing that it cannot afford. “It’s indicative of a far greater problem within Pakistan,” said Akbar Zaidi, a leading economist. “The donors don’t trust the government to come up with the money.”

Government officials reject the criticism that Islamabad suffers from a credibility problem. The newly appointed Finance Minister, Abdul Hafeez Sheikh, is a widely respected figure who enjoys support across the political spectrum and who served as a successful minister in the government of Pervez Musharraf. Mr Sheikh has the task of setting up a system of rigorous checks to ensure that all the money goes where it is needed.

The political opposition has seized on the slow arrival of aid and the new borrowing to accuse the government, led by President Asif Ali Zardari, of failing to burnish its image abroad and plunging Pakistan into a spiralling debt crisis. “The money that’s come in so far is peanuts,” said Mushahid Hussain, an opposition leader. “There is a yawning credibility gap between the government and how it is perceived by not just the international community but also its people. It is seen as too corrupt to deal with.”

Nawaz Sharif, a former prime minister, has even proposed that Pakistan has no need for foreign aid. But a senior government official said that Mr Sharif’s stance was an unhelpful attempt at courting and stoking nationalist sentiment amid tragedy. “It’s a nutty approach,” the official said. “If people are there to help you, and they want to help you, why do you want to make them uncomfortable?”

“The debt-servicing burden will just kill the country,” said Ahsan Iqbal, a leading member of Mr Sharif’s right-of-centre party. “We won’t be able to build anything in this country of our own.” Mr Iqbal says that the government could have opted instead to generate up to $3.76bn by reappropriating development budgets and slashing government funding.

Critics say that such measures would involve cuts on a scale so fearsome that it would leave George Osborne blushing, depriving the country’s poorest of basic development schemes.

The disaster has revealed decades of infrastructural neglect that damns successive governments. However efficiently the current government may have been able to mobilise resources, the state’s capacity was woefully lacking in the first place.

Before setting off for Washington, Mr Sheikh said that he was not prepared to put a figure on the scale of damage to the economy. “It’s still too early to assess the full impact of the disaster, but the damage is colossal. It’s still unfolding. It will run into billions and billions of dollars. There is a massive loss of infrastructure. Dams will have to be repaired. In the north-west, not a single bridge has survived along the Indus River. Roads will have to be rebuilt. And schools in the countryside need repair.”

Some 17 million acres of agricultural land have been submerged by the floods, which are still raging in the southern province of Sindh. Key crops including wheat, cotton and rice have been affected. “We had plans to export surplus wheat,” said Mr Sheikh. “It was an economic opportunity since Russia has stopped exporting wheat, raising its price. We cannot export wheat now because we have to feed our own people.”

Pakistan’s economy has long suffered problems because of its embarrassingly narrow tax base. Broad sections of the wealthy, including senior politicians, pay little or no tax. But Mr Sheikh said that the crisis could be an opportunity to take tough economic decisions the government has long wanted to. “We could push through a sales tax, introduce a flood surcharge on well-to-do people and get some leeway from the IMF.”

There are other silver linings, Mr Sheikh said. The reconstruction effort could lead to “a spur of economic activity”. For agriculture, the silt left behind by the floods will make the land in some areas more cultivable.