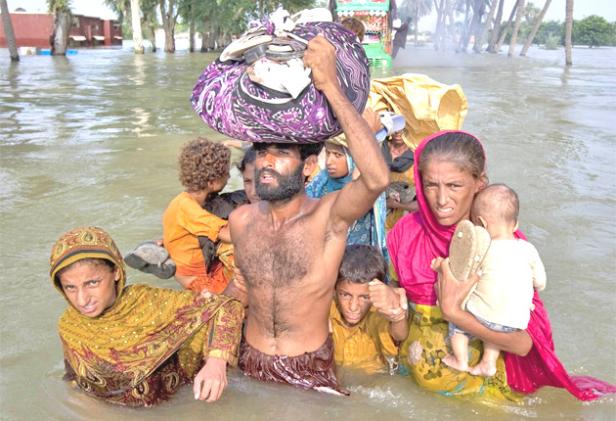 A displaced family wades through floodwaters in the Muzaffargarh district of Pakistan’s Punjab province. The lives of 20 million people have been disrupted by the worst floods to hit the country (REUTERS)

The world Bank has offered a $900m (£577m) loan to Pakistan to help with the country’s flood recovery programme.

As aid donations to the beleaguered nation fall short of what is needed, the body said that funds would be diverted from ongoing and planned projects in the country. “We are re-prioritising to make the funds immediately available,” said spokeswoman Mariam Altaf.

With widespread destruction of roads, bridges and other vital infrastructure, experts say that rebuilding could take many years and cost billions to complete. There are concerns that millions of people will need food aid, emergency shelter and medicine for weeks, if not months, to come. While the lives of an estimated 20 million people have been disrupted by the floods, agencies say that food and clean water have only so far been provided to 500,000. Anywhere between 3.5 million to 6 million children are said to be at risk from water-borne diseases.

The UN appealed last week for $459m that it said was required simply for immediate relief efforts, yet so far it has received just 40 per cent of that, with a further $43m pledged. “We would like our pledges to turn into cheques as soon as possible because the situation is getting very bad,” said Maurizio Giuliano, a UN spokesman.

Aid agencies such as Oxfam have criticised the international community for not doing more. There is concern that allegations of corruption directed at the Pakistani authorities have dissuaded some from giving, or else from giving as much as they might. A number of countries, among them the UK, are directing their donations through the UN. In addition to money donated by the British Government, the Disaster and Emergency Committee said last night that £17m had been collected so far from individuals and corporate donors in Britain for flood relief. The money will be used by the DEC’s member agencies, including ActionAid, Christian Aid and Save the Children.

The unprecedented floods, which killed around 1,600 people, have also created frustration and confusion. Millions of acres of agricultural land have been destroyed at the cost of up to $3bn, and ordinary people who already struggled to get by before the flood struck, are now confronted by a spike in food prices. The cost of vegetables and rice has already reportedly leapt.

Dealing with the spread of disease, especially among children, is also a pressing issue for aid groups. “We have a country which has endemic watery diarrhoea, endemic cholera, endemic upper respiratory infections and we have the conditions for much, much expanded problems,” Daniel Toole, a senior official with the UN children’s charity, UNICEF, told reporters in Islamabad. “We cannot spend pledges. We cannot buy purification tablets, we cannot support Pakistan with pledges. I urge the international community to urgently change pledges into cheques.”

What makes the situation even more perilous is that the devastation left by the flooding could yet get worse. Authorities in Sindh province said more flooding was expected over the next day or so.