See also: The GMO Catastrophe In The US, A Lesson For The World 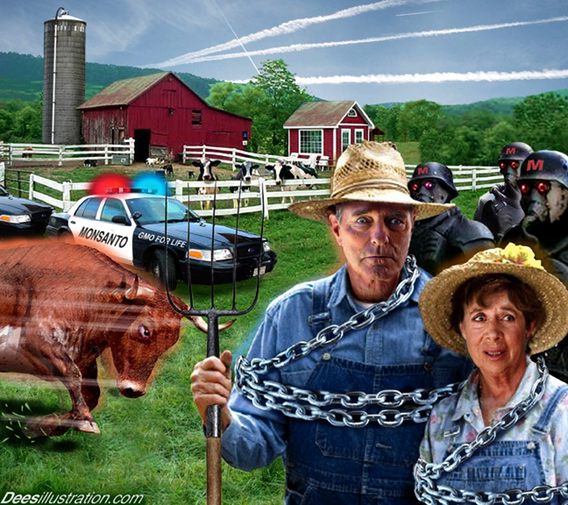 Last Friday a federal judge imposed a nationwide ban on GMO sugar beets and it was overturned the next business day. Sugar beets comprise 50% of the sugar used in US food, and 95% of the sugar beets grown in the US are GMO. It is the jurisdiction of the US Department of Agriculture to determine whether plants are environmentally safe; this case is about whether the plants can cross pollinate (by wind, insects, etc) and contaminate other plants. This could have cost Monsanto billions of dollars.

Less than 2 weeks ago, wild growing canola in North Dakota was discovered to be 86% GMO. Because GMO crops are crossed with herbicide resistant plants (usually weeds), they grow like weeds and contaminate natural plants. Alarmingly, two of the canola samples collected by scientists showed that multiple genes from different species of GMO canola plants cross pollinated without cultivation, and probably for several generations. The implication of this is that GMO seeds can readily contaminate natural seeds and become out of control.

The GMO alfalfa ban lawsuit about contamination was the first GMO case ever heard by the Supreme Court, despite countless lawsuits from farmers whose fields have been polluted by GMOs. The sugar beet ban was overturned, based on a Supreme Court decision (7-1), which lifted the nationwide ban on GMO alfalfa in June.

The Supreme Court ruling stated that the nationwide GMO alfalfa ban was too broad, so it was lifted; an Environmental Impact Report (EIR) to be performed by the USDA is still pending. GMO crops are environmentally dangerous because they can readily spread, as proven by the wild GMO plants found in North Dakota. The Supreme Court never addressed the issue of whether GMO plants contaminate natural plants through cross pollination.

Remember that the appointed Supreme Court judges collect their paychecks from the federal government. The USDA co-owns a patent with Monsanto for the ‘Terminator’ gene (which make seeds go sterile after one harvest). Is the Supreme Court’s loyalty to the federal government, in this case protecting the ‘Terminator’ patent owned by the USDA and its business-partner Monsanto, or is their loyalty to the American people?

The Supreme Court has never accepted a GMO food safety case, which falls under the jurisdiction of the corrupt FDA. Organ damage and sterility have been linked to a GMO food diet in lab animals.

Many of the organizations that represent farmers whose farms appear to be compromised. For instance, Andrew Kimbrell of the Center for Food Safety has another tax-exempt organization that is pursuing the removal of natural colloidal silver from public use and has accepted $1.75 million from the John Merck Fund, which has ties to the Rockefellers, who have been major financiers of biotechnology and food control for decades.

The Sierra Club’s own website supports the United Nations Population Fund which has its roots in eugenics.

Earthjustice is another example of a tax-exempt organization that uses the Agenda 21 Sustainable Development model for “helping” people and the environment, when really the overall objective is to reduce the population. Earthjustice has a  $30 million budget and they support the Sierra Club’s mission against the “overriding threat of spiraling population growth and over consumption.”

Monsanto’s GMOs, which no one would want if they fully understood the health and contamination dangers, have thoroughly infiltrated America’s farms and food supply by way of government regulations, which is how monopolies are created. The Rockefellers have practiced food control for generations and fund biotechnology. The US government has worked in opposition to farmers and public health in granting Monsanto patents on seeds, thus enabling Monsanto’s licensing agreements with farmers that keep the farmers paying royalties even after they stop growing Monsanto products. The United Nations has been complicit in spreading GMO seeds across the world through WTO regulations and other means. Many environmental NGOs are accredited through the UN, “non-profit” organizations (tax-exempt is a better description because many of these 501(c)3 organizations reap plenty of profits) and tax-exempt foundations all work together to pursue the Agenda 21 Sustainable Development goals of depopulation and total control, using the environment as the excuse. For the full analysis of Food & Depopulation, please click on these links:

The Rockefeller Family- Part One

The Supreme Court decision that lifted the nationwide GMO alfalfa ban because it was “too broad”, means that if GMOs are to be banned, it is up to the States and local governments, so please send this article to your State and local government represtentatives.