Shoppers are paying up to 58 per cent more for basic grocery items than they were three years ago, according to figures published today.

The price of tea has shot up by 30 per cent while the cost of staple foods such as bread and eggs have risen by 18 per cent since 2007.

But the biggest increase has been in the price of rice and pulses such as lentils or beans, which have risen by 58 per cent. 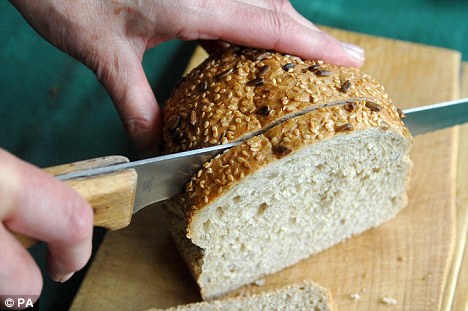 The cost of staple foods such as bread and eggs have risen by 18 per cent since 2007. The soaring prices are in contrast to the overall inflation rate

Figures compiled by the price comparison website mySupermarket.co.uk show that parents with young children are also being hit particularly hard.

The cost of baby wipes, creams and bath wash has risen by 38 per cent. Baby food and snacks have gone up by 21 per cent while baby milk and drinks have increased by 29 per cent.

Even pets are proving to be an increasing drain on families, with dog food up by 20 per cent and cat food rising by 13 per cent.

The soaring prices are in contrast to the overall inflation rate, which is currently 3.2 per cent a year.

Britain’s high food prices are also at odds with many of our European neighbours, who have seen their grocery bills fall steadily over the past year.

The mySupermarket research does not quote prices for individual items. Instead, the researchers selected a basket of supermarket items for each food category from Tesco. 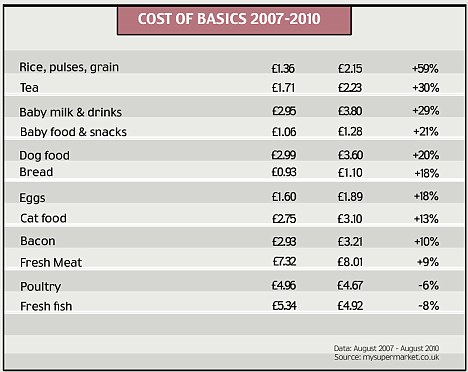 They then divided the total price by the number of items to give average prices and compared their results for 2007 and 2010.

The statistics show the same worrying trends as the Daily Mail’s Cost of Living Index, which in January found that the cost of a basket of the most commonly bought foods had increased by 7.5 per cent in 12 months.

Experts say UK food prices have surged above the official rate of inflation because of worries about the financial uncertainty in the face of drastic public spending cuts.

Nervous shoppers are concentrating on buying essentials rather than luxury items, which is pushing up food price inflation.

Jonny Steel, of mySupermarket, said: ‘While prices generally have stabilised or even gone down over the past year, the cost of everyday essentials has still dramatically increased in the last three years. ‘

Consumers may feel they are starting to bounce back from the effects of the recession, but the battle to save money is still very much on.’

The price of bread, pasta and many processed foods is likely to rise further after Russia announced a ban on the export of wheat. Analysts believe Britons could soon be paying 15p more for a loaf of bread.

Russian prime minister Vladimir Putin said it was necessary to protect his country against wheat shortages following a severe drought which has ravaged crops.

Melons, kiwi fruit and olives are being grown commercially for the first time in the UK because of warmer summers and improved farming techniques.

Stephen McGuffie is growing cantaloupe melons in Lichfield, Staffordshire and his first crop is expected next month.

They are due to be sold by Marks & Spencer. Kiwi fruit is being grown near Canterbury, Kent, on a large scale and they are expected to be sold in the high street when the plants mature in a couple of years’ time.

Mark Diacono has planted 120 Italian olive trees on his farm near Honiton in Devon, and hopes to produce olive oil.