… and now he warns of the fallout (= inflation)!

Mervyn King is a criminal and a perfect elite puppet, like Bernanke.

British consumers should prepare for lingering higher inflation, the Bank of England Governor has warned, as latest figures show a sharp jump in food prices. 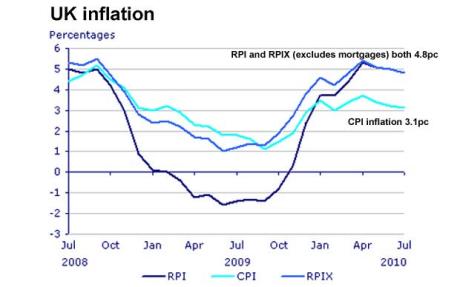 Mervyn King, the Bank’s Governor, voiced surprise that prices are higher than he had expected in a letter of explanation to the Chancellor George Osborne. While the overall consumer prices edged down to 3.1pc from 3.2pc in June, it remains above the Bank’s own 2pc target, and the small decline will do little to ease the fear of some economists that a high cost of living will undermine Britain’s fragile recovery.

Mr King must write to the Treasury each month that inflation exceeds 3pc, and he said he is likely to have to send several more letters. Inflation will probably not return to target until the end of 2011, he said.

“Food price inflation has moved up strongly … and that’s perhaps a trend that’s going to continue over the next 12 months,” said Philip Shaw, an economist at Investec.

Today’s figures from the Office for National Statistics also showed that the Retail Price Index, a measure of inflation generally seen as the best gauge of the cost of living, was at 4.8pc last month. Again, though lower than June’s 5pc, it’s far outstripping any pay rises companies may be awarding.

Mr King has insisted that the price pressures are driven by temporary influences such as the price of oil.

Inflation’s persistently high level has already prompted Andrew Sentance, one of the nine people who decide the cost of borrowing at the Bank, to start voting for higher interest rates. The minutes of the Bank’s latest meeting are due tomorrow and traders will be keen to see if anyone has joined Mr Sentance.

However, today’s figures do provide some ammunition for Mr King’s claim that the loftier level of inflation will pass. Core inflation, which excludes more volatile elements such as energy, fell from 3.1pc to 2.6pc, its lowest level since the end of last year.

He wrote in his letter today that policy-makers “stand ready to expand or to reduce the extent of monetary stimulus” as needed, prompting Mr Osborne to reply that he welcomes the bank’s “flexibility.”

The Governor will “be relieved that those forces that they have long argued will bring inflation back down appear finally to be asserting themselves,” said Jonathan Loynes from Capital Economics.

Food prices have been hit by adverse weather during harvests around the world. The cost of grains in particular could rise further after Russia banned export of wheat because of a severe drought.

Today’s inflation figures are particularly important for rail passengers because national fare rises are based on the July measure of the Retail Price Index (RPI), which dropped to 4.8 per cent. Under the current formula companies are allowed to raise ticket prices next year by one percentage point above that. However, the budget constraints being imposed by the Government may see even larger increases.