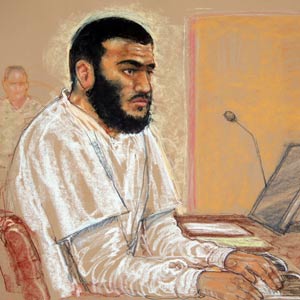 In one of the first military commissions held under the Obama administration, a US military judge has ruled that confessions obtained by threatening the subject with rape are admissible in court.

The case involves Omar Ahmed Khadr, a citizen of Canada who was apprehended in Afghanistan when he was 15 years old for the last seven years awaiting trial for terrorism and war crimes. and has remained in Guantanamo Bay

As AFP reported on Monday,

Khadr, now 23, is accused of throwing a grenade in 2002 that killed a US soldier. He also is alleged to have been trained by Al-Qaeda and joined a network organized by Osama bin Laden to make bombs.

“It’s very clear that the government of the US and the government of Canada have decided not to intervene in this case and therefore we are going to see the first case of a child soldier in modern history,” said his military lawyer Jon Jackson.

In addition to being a child soldier, there is evidence that Khadr’s confession was obtained though the use of threats of violence and death.

In May hearings, a man identified as Interrogator 1 said in testimony that he threatened Mr. Khadr with being gang-raped to death if he did not co-operate. That interrogator was later identified as former U.S. Army Sergeant Joshua Claus. He has also been convicted of abusing a different detainee and has left the military.

Mr. Khadr’s military-appointed lawyer, Lieutenant-Colonel Jon Jackson, argued this instance, as well as other alleged instances of torture and coercion, are enough to render any future confessions – even those in so-called “clean” interrogations – inadmissible in court.

Although Khadr’s confessions were obtained in this manner, the military judge presiding over the case ruled they are still admissible as evidence.

Another Guantanamo detainee, a former bodyguard of Osama bin Laden, has already entered a plea agreement, but information about his sentence has been sealed by a US military judge.

In response to the two tribunals, Jennifer Turner writes at the American Civil Liberties Union’s Blog of Rights:

Although President Obama promised transparency and sharp limits on the use of tortured and coerced statements against the accused, at Guantánamo today one military judge ordered that a sentence be kept secret from the public and another military judge allowed statements obtained by abuse and coercion of a 15-year-old to be used at trial.

The United Nations has also condemned Khadr’s trial, saying that “the statute of the International Criminal Court makes it clear that no one under 18 will be tried for war crimes,” and noting that “no child has been prosecuted for a war crime” since World War II.

When set against the systematic failure of the US authorities to ensure accountability and remedy for the human rights violations, including torture, that have occurred at the hands of US personnel in the context of what the previous administration called the “war on terror”, the ruling – which took no more than perhaps 90 seconds at the outside to deliver – is less surprising, if no less troubling.