The dollar and government bonds will collapse.

The question is when exactly? 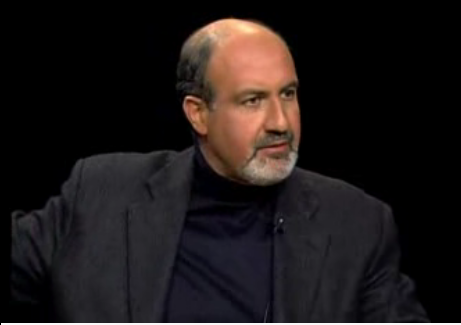 Aug. 11 (Bloomberg) — Nassim Nicholas Taleb, who warned that unforeseen events can roil markets in “The Black Swan,” said he is “betting on the collapse of government bonds” and that investors should avoid stocks.

“I’m very pessimistic,” he said at the Discovery Invest Leadership Summit in Johannesburg today. “By staying in cash or hedging against inflation, you won’t regret it in two years.”

Treasuries have rallied amid speculation the global economic recovery is faltering, driving yields on two-year notes to a record low of 0.4892 percent today. The Federal Reserve yesterday reversed plans to exit from monetary stimulus and decided to keep its bond holdings level to support an economic recovery it described as weaker than anticipated. The Standard & Poor’s 500 Index retreated 16 percent between April 23 and July 2, the biggest slump during the bull market.

The financial system is riskier than it was before the 2008 crisis that led the U.S. economy to the worst contraction since the Great Depression, Taleb said.

Prior to the collapse of Lehman Brothers Holdings Inc. in September 2008, Taleb warned that bankers were relying too much on probability models and were disregarding the potential for unexpected catastrophes. His book labeled these events black swans, referring to the widely held belief that only white swans existed until black ones were discovered in Australia in 1697, and said that they were becoming more severe.

Taleb helped pioneer the concept of hedging against these tail-risk events while trading options in the 1980s for banks such as First Boston Inc., now part of Credit Suisse Group AG. Now a professor at New York University’s Polytechnic Institute, Taleb set up the tail-risk hedge fund Empirica LLC in 1999 and ran it for six years.

In February, he told a conference in Moscow that “every single human being” should bet Treasury bonds will decline. It’s a “no-brainer” to sell short the debt, he added. Since then, 2- and 10-year notes have rallied.

To contact the reporter on this story: Renee Bonorchis in Johannesburg at rbonorchis@bloomberg.net.