There is no recovery! This is the Greatest Depression. 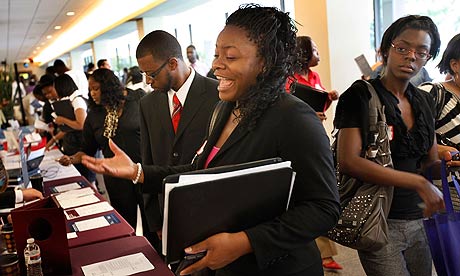 Employers in the US shed twice as many jobs as expected in July, adding to fears that the recovery in the world’s largest economy will not see a revival in employment.

The dismal US job figures came as the National Institute of Economic and Social Research predicted a protracted depression for the UK economy.

Across the Atlantic talk of a double-dip recession was revived when the government revealed 131,000 jobs were lost last month. That dwarfed forecasts for a fall of 65,000. June’s drop was also revised to a far steeper 221,000 from 125,000.

The July drop was mainly due to work by temporary staff on the government census coming to an end. But private hiring was also weaker than expected.

Economists forecast that private-sector jobs would rise by 90,000, but in the event only 71,000 were added.

The White House urged critics not to read too much into a single month’s data while president Barack Obama said it was a “good sign” the US had added private sector jobs every month this year.

Financial markets were less upbeat. There were solid rises for government bonds, seen as safer investments when the economic picture darkens, while stock indices fell, including the FTSE 100 in the UK. The pound rose against the dollar, touching a high of $1.60.

Stephen Gallagher, economist at Société Générale, said: “This employment report only reinforces a sluggish recovery. Private sector job and income gains are not weak enough to point to a renewed downturn, nor are they strong enough to suggest the recovery is free of such risk.”

Within July’s drop, 143,000 jobs were census staff who were laid off, but there were also a further 59,000 public sector job losses as the US government mirrored its counterparts around the world in tightening budgets. Economists voiced concerns that the private sector outlook was also gloomy, suggesting that Americans will remain wary about their job prospects and do little to power the recovery.

The sharp drop in jobs, which follows news of slowing economic growth in the US, is likely to prompt discussions at the Federal Reserve’s market committee meeting on Tuesday over implementing more quantitative easing – a way of pumping money into the financial system. Fed chairman Ben Bernanke has already hinted to markets that its programme of asset purchases could be resumed.

The spectre of a double-dip recession was also raised in the UK this week with a closely watched business survey suggesting firms are already taking a hit from cancelled public sector contracts. NIESR said economic growth was already losing steam and the trend would continue over the coming months.

The thinktank estimated GDP growth slowed to 0.9% in the three months to July, slipping back from 1.1% in the three months to June. But that was still above the 0.6% for the third quarter as whole predicted by the government’s fiscal watchdog, the Office for Budget Responsibility. NIESR predicted output was unlikely to get back above its previous peak until 2012, meaning the economy was in for a “period of depression”.

Echoing business surveys suggesting demand is flagging, official data showed a surprise fall in industrial production in June. But within that the smaller manufacturing sector still managed to increase its output, albeit at a slower pace than expected.

Meanwhile, news that the number of companies being wound up dropped sharply in the second quarter was accompanied by warnings that liquidations could soon pick up again as the recovery stalls. The government’s Insolvency Service reported a 19.1% fall in company liquidations on a year earlier to 4,080. Personal insolvencies posted their first quarterly fall since the end of 2007 but were still up 5% on a year earlier at 34,743.