Russia’s devastating summer heatwave has cost almost 5,000 lives, according to officials who conceded yesterday that the state was struggling to gain control over the worst wildfires in decades. 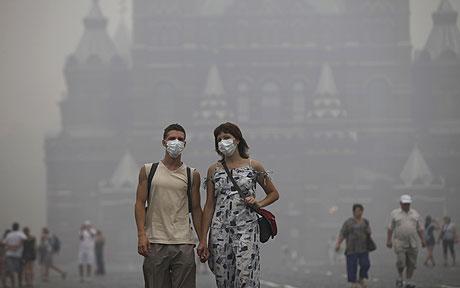 Moscow’s landmarks, including the Kremlin and St Basil’s Cathedral, are shrouded in a thick, acrid haze (AP)

The ministry for emergencies issued an urgent call for volunteers to join fire brigades to bolster the fight against the peat and forest fires raging out of control around Moscow.

Temperatures in Russia have hit records for the time of year on at least six occasions in recent weeks. Forecasters said there would be no respite from temperatures above 97F (36C) for at least another week.

Death rates have escalated steadily since the heatwave began, according to statisticians. “We recorded 14,340 deaths in Moscow in July, that is 4,824 deaths more than in July, 2009,” said Yevgenia Smirnova, an official from the Moscow registry office. 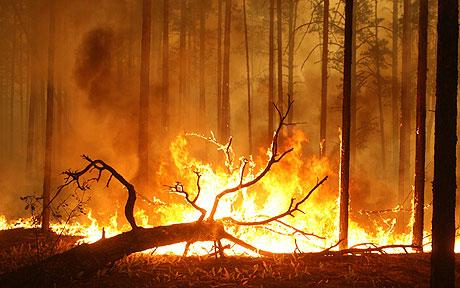 Firemen are battling to stop the flames encroaching on the capital. Moscow’s landmarks, including the Kremlin and St Basil’s Cathedral, were shrouded in a thick, acrid haze. Those workers not ordered to stay at home wore masks as they struggled through the streets.

As many as 140 flights were cancelled or delayed as visibility at Moscow’s airports was reduced to 1,148 feet (350 metres). Carbon monoxide in the city’s air rose to as high as 4.8 times the admissible maximum level before tapering off slightly as night fell.

The health ministry advised people to stay indoors, limit physical activity and wear a mask when going outside.

The authorities have warned of the risk of fires reactivating contamination in an area to the south and west of Moscow that was affected by the 1986 Chernobyl nuclear disaster.

The risks posed by the fires encompass dozens of sensitive sites built up in the Soviet era. Military units were mobilised to remove artillery and missiles from bases around the capital and warnings were issued of the peril facing Sarov, a closed city that is home to Russia’s nuclear research headquarters.

The Russian nuclear agency has said that all radioactive and explosive materials have been removed from the centre and the emergencies ministry has assured the public it has the situation under control.

President Dmitry Medvedev cancelled his annual holiday in the Black Sea resort of Sochi and issued despairing advice the morning after his return. “I woke up this morning, looked out of the window and saw a monstrous situation,” he said. “We all want this heatwave to pass but this is not in our hands, it is decided above.”

Almost half a million acres are still burning and Nasa images have shown smoke from the fires visible from space. The US space agency said the smoke has at times reached six miles into the stratosphere.